The CMA Music festival, set to take place in Nashville this June, has announced two new additions to their stadium lineup: Jake Owen and Cole Swindell.

Swindell and Owen will join the list of established artists performing throughout the four-day festival, including Carrie Underwood, Keith Urban, Blake Shelton, and Chris Stapleton. Although Swindell hasn’t released a full-length since 2016, he just dropped the single “The Ones Who Got Me Here” earlier this month. Additionally, he released another hit single in February, titled “Break Up In The End.” He is best known for “Flatliner” with Dierks Bentley, and “Middle of a Memory” off of his 2016 record, You Should Be Here.

Additionally, Owen hasn’t released an album since his 2016 LP American Love. However, the singer also has some new music to offer for fans at the fest; he dropped singles “I Was Jack (You Were Diane),” “Something To Ride To,” and “Made For You” in April. These join his top hits like “Barefoot Blue Jean Night” and “American Country Love Song.”

Owen is scheduled to perform on Friday, June 8 – the same night as Underwood and Luke Combs – while Swindell will take the stage on Sunday, June 10 alongside top acts like Dierks Bentley and Luke Bryan. Both will perform on the Nissan Stadium stage, which requires a ticket for the night.

Throughout the festival, hundreds of artists will perform throughout the country capitol. There will be free shows outside during the day at various stages, including the Chevy Breakout Stage, Budweiser’s Forever Country Stage, and the Chevy Riverfront Stage. Guests can expect to see artists Gavin DeGraw, Hunter Hayes, Scotty McCreery, and Cassadee Pope, along with some old-time favorites like Mark Wills during the day.

Additionally, the HGTV Lodge will return this year, which will showcase acoustic performances from Ashley McBryde, Kip Moore, Jon Pardi, Lee Ann Womack, and more. The festival will also include numerous activities and opportunities for fans to interact with artist and one another, like shopping, panel discussions, artist meet and greets, and Artist of the Day sessions.

Check out the full lineup below and snag a pass to the festival, taking place from June 7 to 10, via Ticket Club. 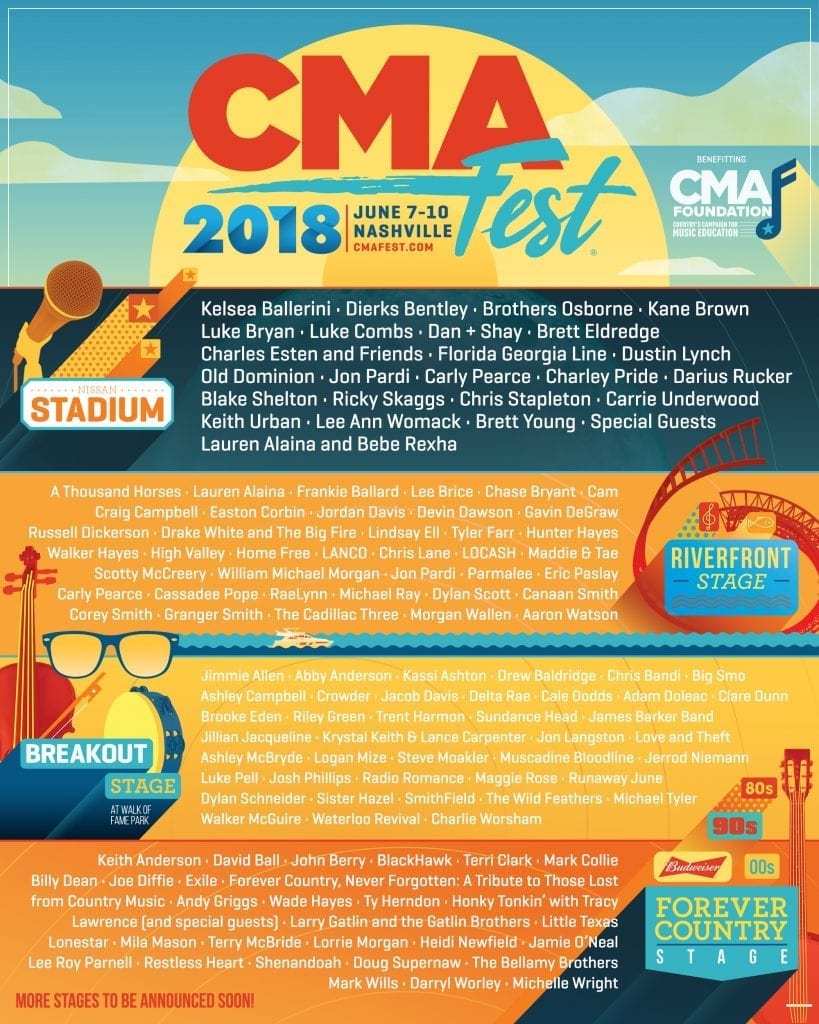