With the NFL’s first regular season weekend in the books, stories are rolling in from around the country of frustrated fans and long lines as the league and its main primary ticketing provider – Ticketmaster – shake out the bugs of their new “safetix” mobile-entry (and only mobile) ticketing system.

The two non-Ticketmaster venues in New Orleans and Dallas (ticketed by SeatGeek) did not appear to have issues.

Local media covering the Cleveland Browns, Carolina Panthers, New York Jets and Jacksonville Jaguars all ran stories on Sunday or Monday detailing the headaches and delays fans felt as they struggled to pull up the mobile tickets – which now feature “dynamic” barcodes that prevent users from taking a screenshot of the entry code to save to their phone and avoid having to use the often spotty internet in a large crowd.

Twitter user OnsalePro also compiled a number of other angry tweets from fans struggling to enter stadiums, including at Miami, Arizona, and Seattle.

“It was a bad experience from my perspective and everybody in line,” a fan told reporters from Cleveland’s 19 News station. “If you got to the front of the line, and everyone wasn’t there with you or together, it held up the line. We got here an hour before the game and not a chance were we even in there to see the fireworks or barely the kickoff.” 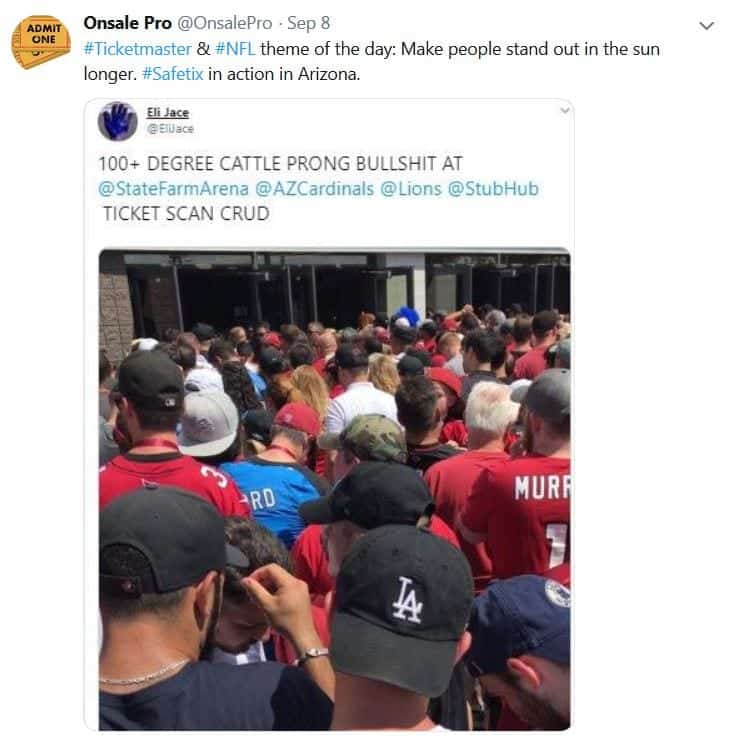 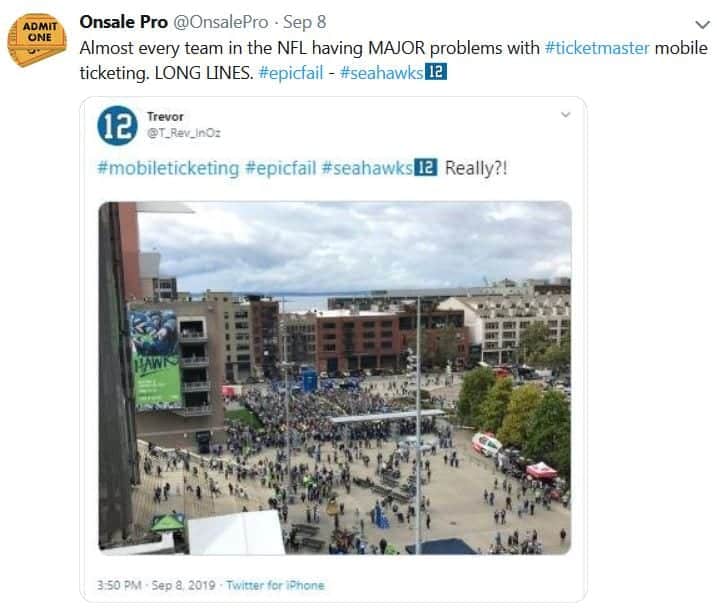 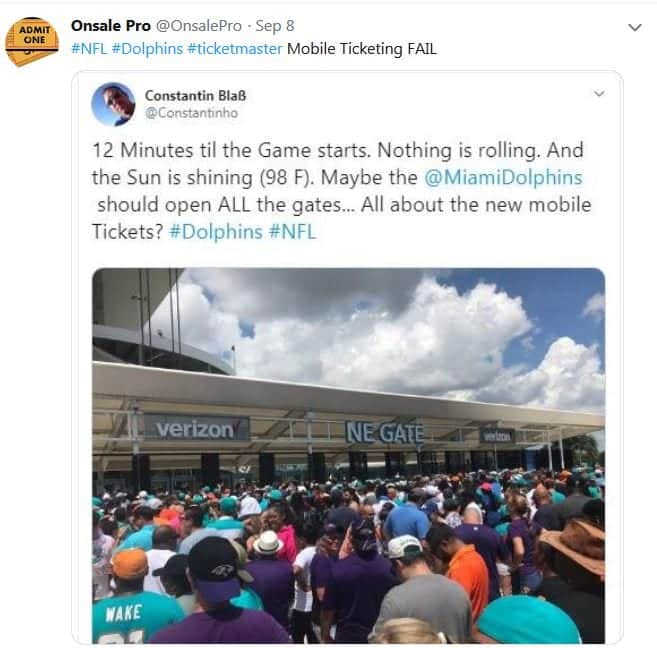 One family in New York didn’t attend the opener at all – because for the first time in a near-decade of holding Jets season tickets, the team did not issue any printed tickets to them. After paying over $2,500 for his tickets, he realized that his phone – a flip phone – wasn’t compatible with a mobile-only ecosystem.

“To me, I think they’re discriminating against the older generation, that’s what I feel,” he said in an interview with News 4 New York. The news story helped him – the team told the reporters they would print tickets just for him, linked to his rewards account – but the policy remains for others in a similar technology situation in this new policy world.

Other fans complained about the difficulty in listing tickets they can’t use for sale – because the only way to move a ticket to anyone else is through officially-approved channels or by transferring tickets directly through the ticketing system. Carolina Panthers season ticket holder Billy Payne was frustrated at the thought of the fact that he would be throwing “$600 down the tubes everyday [he can’t attend a game] which is basically what I ended up having to do.”

He watched the first week’s game from home, but was never able to sell his tickets on because of the system restrictions and an inability of team staff to help him through his difficulties. “All my conversations with Panthers staff, they’ve been most receptive but basically say it’s all Ticketmaster, we’re just innocent bystanders,” he said.

Ultimately, many fans have taken fine to the new digital ticketing world, as just another step in the direction of everything being linked and tracking every bit of one’s behavior to report to giant corporations. But for many, this first weekend was a jarring one, and optimism is low that things will get much better anytime soon as the season progresses.

After waiting in line in sweltering Florida panhandle heat behind a number of fans who had major difficulty opening their tickets to be scanned, only to be waved through without even having his scanned at the gate, Jacksonville Jaguars fan Charlie Moore summed up his frustration. “Waiting in the heat [with the issues in mobile ticketing delaying the line] makes going to the games not even worth it anymore.”