Covid Herd Immunity Fest1 Static-X1 Wisconsin2
A 3-day rock festival planned for Wisconsin has changed its name after at least two bands dropped plans to perform in response to fan... 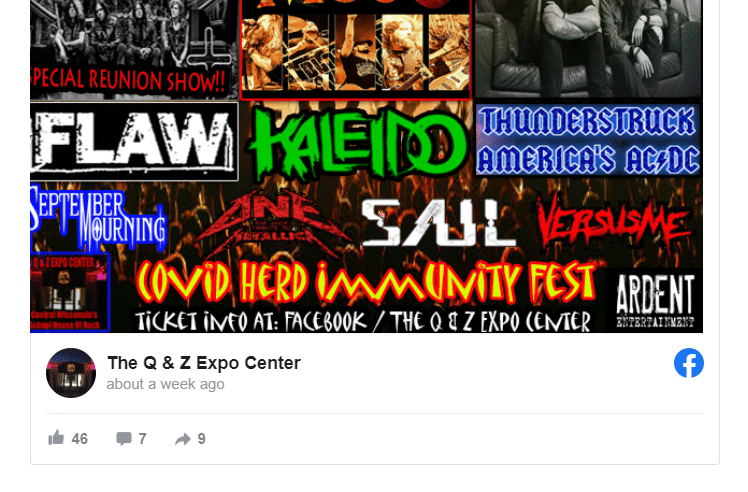 A 3-day rock festival planned for Wisconsin has changed its name after at least two bands dropped plans to perform in response to fan reaction to its being referred to as the “COVID Herd Immunity Festival” in a July 19th social media post. The event is now being referred to as “3 Day Mini Fest.”

Michigan-based Kaleido and Florida-based Nonpoint both dropped their plans to appear after the backlash. “Kaleido will no longer be a part of the Wisconsin Music Festival titled ‘Herd Immunity Festival,” the band wrote on Facebook. “We do not want to put our fans at risk in a country with rising infection rates, we thank you for understanding.”

Other bands appear to remain on the bill for the event, including Saturday headliner Static-X. The event is scheduled for July 16-18 at The Q&Z Expo Center in Ringle, Wisconsin.

Event organizers defended the event, pointing out that despite its perhaps less than politically correct title, it is slated to be an outdoor event allowing just 20% of the venue’s capacity limit of 10,000, meaning “anyone has the choice and ability to social distance.”

In May, Wisconsin’s Supreme Court struck down a stay at home order issued by Governor Tony Evers, a first-term Democrat. Despite the decision, Evers said at the time he hoped that state residents would still practice social distancing as the coronavirus pandemic continues to spread.

“Just because the Supreme Court says it’s okay to open, doesn’t mean that science does,” the governor wrote on Twitter. “We need everyone to continue doing their part to keep our families, our neighbors and our communities safe by continuing to stay safer at home, practice social distancing, and limit travel.”