Organizers tout a “variety of activities for a once-in-a-lifetime experience” at the event, which features VIP sections, pit passes, games areas, and wooded walking trails in addition to the on-stage features. 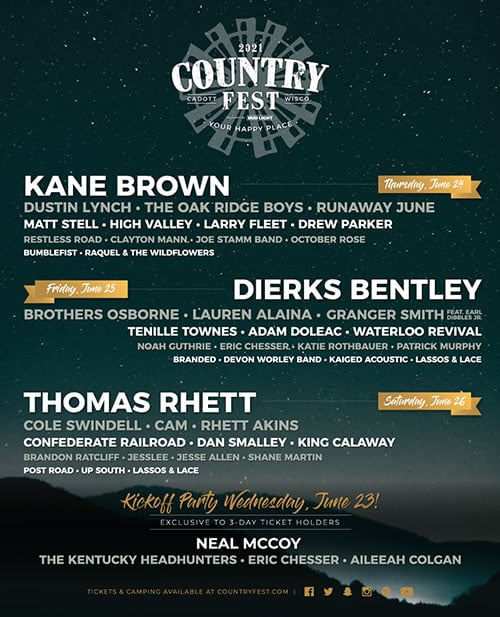 Those who purchased tickets to the 2020 edition are welcomed to use their existing wristbands for the 2021 fest. Those who have not can purchase tickets now at countryfest.com.

The full press release announcing the lineup is included below:

With 13 No. One hits and the most played artist on the radio, Thomas Rhett recently won ACM Awards Male Artist of the Year. His new album, Center Point Road made history, earning the highest streaming debut for a country album ever. The album is about knowing where you came from and who you really are, regardless of how much has changed.

Dierks Bentley is an Arizona native that has scored 18 Number Ones like “What Was I Thinkin’,” “I Hold On” and “Black” and 13 Grammy nominations. He’s built a reputation as both a dedicated family man and a forever-young drifter, put in millions of miles on headlining tours and taken the fearless stylistic detours of a truly authentic artist.

Singer/songwriter, Kane Brown has forged his own path through the music industry, becoming the first artist ever to be #1 on all 5 of Billboard’s main country charts simultaneously. His self-titled album debuted at #1 on Billboard’s Top Country Albums, Top 10 on the Billboard 200 all-genre chart, and became the #4 best-selling new-artist album debut of 2016 in any genre.

Next June, crowd-favorite Neal McCoy will kick things off right by headlining the Wednesday Kickoff Party, exclusive to all 3-Day ticket holders. One of Nashville’s newest success stories, Kane Brown will hit the Main Stage on Thursday, June 24 to keep the party going.
Multi-platinum singer/songwriter Dierks Bentley will get the crowd a little sideways on Friday, June 25. Then, ACM Awards Male Artist of the Year Thomas Rhett will close out Country Fest right on Saturday, June 26.

Beyond the music, Country Fest offers a variety of activities for a once-in-a-lifetime experience! Attendees can relax in Hammock Haven, play giant games, take a stroll through the Northern Lights wooded walking trail, and much more.

All tickets and campsites are on sale now at countryfest.com or by calling the Country Fest office 800-326-3378. Order now because VIP sections are selling fast. Additionally, pit passes are limited and give fans the best experience to see their favorite Main Stage artists up close. For the full lineup and ticket details, visit countryfest.com

If an attendee already purchased tickets to Country Fest 2020 and plans to attend the June 2021 dates, their wristbands will be valid for the 2021 festival!

ABOUT COUNTRY FEST
Country Fest has been entertaining attendees in its one-of-a-kind natural amphitheater venue for over 33 years. Set on more than 320 acres in picturesque central Wisconsin, Country Fest has the best views from any location in the grounds and over 6,000 campsites including Electric, VIP, General and Glampsites. Country Fest prides itself on being an all-out summer vacation destination, complementing the incredible musical acts with a huge variety of food and merchandise vendors, interactive games, exciting rides, photo booths, experiences and more.
Country Fest annually sees tens-of- thousands of fans travel from every state in the U.S., as well as more than 14 countries outside the U.S. Join the Country Fest action June 24-26, 2021.