BTS83 KPop1 PERMISSION to Dance ON STAGE3 sofi stadium16 Ticketmaster785 Verified Fan58
The first BTS in-person concert in nearly two years went on sale this week, and some fans are venting their frustrations at Ticketmaster over...

The first BTS in-person concert in nearly two years went on sale this week, and some fans are venting their frustrations at Ticketmaster over reports of glitchy systems, failing codes, and sky-high ticket prices. The popular K-Pop group hasn’t even seen tickets for its four show SoFi Stadium residency this fall go on sale to the general public, but its “Army” of fans have already found plenty to complain about on social media.

Sales this week were limited to specific groups – VIP ticket purchasers from the COVID-cancelled Map of the Soul tour had first crack on Tuesday, followed by other ticket purchasers of the MOTS tour on Wednesday, with Thursday seeing global “Army” fan club members who pre-registered and were selected through Ticketmaster’s Verified Fan system get their shots. Friday will see a fourth tranche – non “Army” members who registered and were selected as “verified fans” can purchase tickets. Saturday will see the release of some remaining tickets to the general public – if any remain.

Despite the seeming exclusivity of the offerings, complaints came fast and furious for those who did not get seats, or had to endure high stress and system issues before getting them if they did.

“I fing hate TM,” one fan vented on the allkpop.com forums. “I had code to buy today and kept getting the error 007 for for like 45 min. Tickets were VANISHING infront of my eyes. I got in to buy within 15min of opening. Finally got tickets only to be told it couldn’t process my card. All my payment info is upto date. I have never had so much trouble trying to buy before. Im hoping to get another shot tommorrow if I get an email. If not I’m going to have to buy resale. This sucks. Did I say how much I hate TM.”

Another took to Ripofflist.com, upset that their access to the presale for previous MOTS ticket purchasers was suddenly rejected as the sale time approached.

In 2020 I purchased tickets to BTS’ MOTS tour, when covid hit I was given the choice to either get a refund or get early access to their next concert tickets, I choose the latter. Then when they went on tour again and tickets went on sale I received an email that said I would be able to get into pre-sales. On the day of pre-sales however, after waiting for 5 hours, right before the sale started I was suddenly informed that I was on an account that had not been approved for the presale. I have the email to prove I was indeed chosen. Then after 10 minutes of that I finally got into the queue, only for it to freeze and not move for over an hour! Then when I did finally get into the part of the purchasing ticket, anytime I clicked on a ticket to buy an error message popped up. I continued trying for over 40 minutes before finally giving up. Also, ticketmaster promised that all sections had a certain amount of seats reserved for each pre-sale so that every wave of people would have the chance to get good seats, and yet 10 minutes before the pre-sale began a message popped up saying due to the overwhelming amount of people yesterday soundcheck is not available. This is all completely unfair and all of us should not have to suffer due to ticketmasters pure incompetency! They should make an apology to everyone who was screwed over and resell the tickets, this time using fair methods and without freezing the queue so that the scalpers they pay can buy all the good seats

Twitter, the home of consumer venting when tickets aren’t secured for a hot show, was also rife with complaints, including anger from a USA Today staff member.

“No actually @Ticketmaster @TMFanSupport you all consistently screw fans over,” wrote @fatimafarha_. “I’m seeing so many fans not able to log on with their codes that they were GIVEN by you. And withholding sound check tickets today?? That’s just entirely messed up. Fix your system.”

No actually @Ticketmaster @TMFanSupport you all consistently screw fans over. I’m seeing so many fans not able to log on with their codes that they were GIVEN by you. And withholding sound check tickets today?? That’s just entirely messed up. Fix your system.

Fans who didn’t get passes were supportive of one another, with some pointing out the valid fact that ticket purchasers from a large number of shows were competing for tickets to just four dates in California. 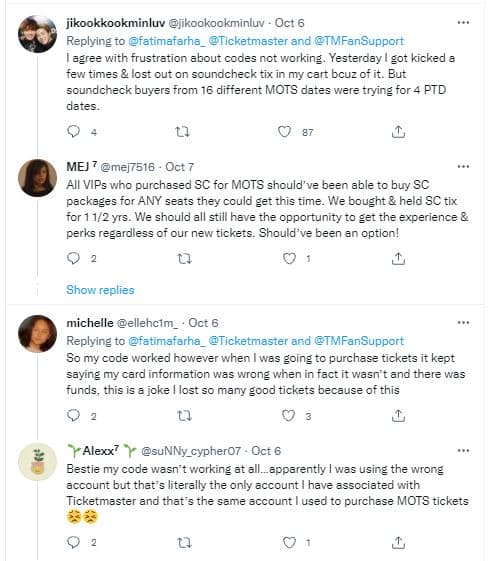 Ticket prices for the BTS Permission to Dance on Stage also caught some flak, as the minimum ticket price for nosebleed seats at SoFi Stadium – which can hold as many as 100,000 fans at its maximum expanded capacity – began at $75 plus fees, with indications that dynamic pricing was potentially in effect if demand was high (spoiler alert – it was). Floor seats were at or above $300 each after fees, with the coveted soundcheck passes going for nearly $500.

also just in case ppl r wondering here’s the ticket price range and here’s the schedule on who buys tickets on which days !
here’s the ticketmaster website that’ll take you straight to info about bts’s la concert : https://t.co/O3FdEh6cI6 pic.twitter.com/qNyu5JFkG0

Given demand, however, most seemed to recognize that those prices were in line with what the popular KPop outfit would be charging for its elaborate shows, and no doubt far below what the resale market will see. Prices for tickets on TicketClub.com, for example, start at $470 for a 500-level ticket, including all fees for Saturday, November 27. Soundcheck tickets are listed for well over $1,000 per pass.

What is very clear is that fans are very passionate about their BTS tickets, and feel wronged by the constant rollercoaster that the ticket purchasing process can bring. But that passion is why the band is so popular, and why these shows in November and December will likely see enormous demand right until the curtain rises.

For those who don’t get BTS tickets through the box office, TicketNews partner TicketClub.com is a good place to check for tickets with all-in pricing for members (AKA no service fees tacked on that make the price go up by 20-30% from what you first saw on the website). Grab a complimentary one year membership courtesy of TicketClub.com here and visit the BTS page to see what tickets are available for the shows if they are sold out.