Fans of Bruce Springsteen had a rude awakening this week, faced with the new normal in ticket prices as shows for the U.S. dates on his 2023 tour went on sale Wednesday. Surged prices, weaponized by the “dynamic” and “platinum” ticket pricing systems put in place by Ticketmaster and Live Nation, were the norm for the fans who made it through the Verified Fan system for the first shows that went on sale Wednesday.

Some tickets were going for as much as $5,000, with many seats well above $1K each for The Boss, who is touring the U.S. with the E Street Band for the first time since 2017 beginning in February. And this is not on secondary markets – this is from the box office itself, which is the new “scalper” by any reasonable measure.

“So I finally got in to Ticketmaster to get some Springsteen tickets, and that motherf****r is out of his mind,” says Bigheads Podcast Network founder John Palumbo in a video posted to Twitter, typical of the reaction across the spectrum of fans in the last 24 hours. “I mean, ticket prices were outrageous. I mean, it had to go from like $700 to $3,000 bucks, and not even for great seats. And listen, I’m rich, and I think that’s f**kin crazy.”

There were a litany of responses to a posting by Springsteen fan magazine Backstreets on twitter, which featured a screenshot of “Verified Fan Official Platinum” seats for a show in Tampa for a mid-tier floor seat with an asking price of $4,388.50 after fees, and a quote from Ticketmaster’s website explaining what platinum pricing means, saying “Tampa mid-floor for $4,400 each, anyone? #catchandrelease.” And most of those responses seem to have grasped the fact that the artists themselves have decided to gouge their fans, fattening up their own and Ticketmaster’s bottom line, helping contribute to Live Nation’s record run of earnings on its way out of the pandemic. 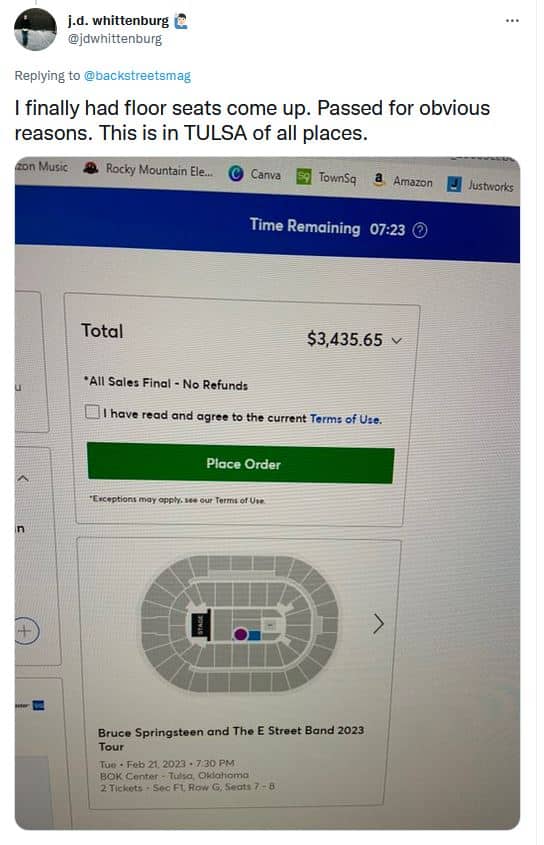 The reaction was strong enough that Stevie Van Zandt, guitarist in the E Street Band (also known for portraying Silvio Dante on HBO’s Soprano’s TV series) was pulled in to respond to some of the fans’ anger, washing his hands of the entire subject. “I have nothing whatsoever to do with the price of tickets,” he tweeted in reply to a fan’s tagging him in a question about the prices. “Nothing. Nada. Niente. Bubkis. Dick.”

I have nothing whatsoever to do with the price of tickets. Nothing. Nada. Niente. Bubkis. Dick. https://t.co/NsDJvoLMWu

The prices being charged may be offensive to many of The Bosses most dedicated (at least, dedicated enough to be “verified” for a chance to purchase tickets to his shows by Ticketmaster’s algorythm) fans, but they shouldn’t really surprise anyone. Ticket prices have been surged to absolutely unprecedented levels by artists and promoters coming out of the long COVID pause on shows. Instead of tickets being offered at a traditional “face value” amount, with some portion grabbed by those interested in selling on the secondary market at inflated prices, the entire industry has been flipped by Live Nation and Ticketmaster into one where the “scalpers” are the artist and promoters themselves.

In the post-COVID ticketing world, the pricing game follows a pretty standard pattern for large tours like Springsteens (or Adele’s, or The Weeknd’s, or even Olivia Rodrigo’s).

This system was famously used during the Taylor Swift reputation tour a few years back, when “Swift Tix” was used to exploit fan demand and reap huge sums for the singer and her promoter. It used the above playbook (with the extra exploitation of fans being able to “boost” their chances of being “verified” by buying tour merch or music). Fans felt the sting of the high prices, but largely bought anyways. Then, the reality of the demand not being anywhere near the artist and her team had made it seem became very real as shows approached – price drops became ticket giveaways, and the artist’s team got tickets listed for resale – many likely by the singer’s own fans who couldn’t make the show – taken down, in order to keep them from competing from remaining tickets for sale from the box office.

It was a debacle, but it has now become standard operating procedure in the industry, and the source of Live Nation’s fat bottom line of late.

That Bruce Springsteen and the E Street Band’s tour dates in 2023 are being sold in this fashion really shouldn’t be a shock at all. Springsteen himself has long been known as an artist who exploited the ticket holdback process to move tickets at market prices through the secondary ticketing world while pretending the box office face value was the price they would be sold at. Verified Fan was used for Springsteen on Broadway (his fans hated it), and ticket prices were astronomical – particularly when one figures that the dollars were being split in far fewer directions than a full band tour.

Unfortunately for fans, this new normal in ticket pricing is likely to stick around – at least until fans push back hard enough for artists to actually listen to them over the dollar signs being dangled in front of them by Ticketmaster and Live Nation when pricing strategies for tours are being decided. Even the BOSS Act – introduced by members of Congress from New Jersey with an acronym based off of Mr. Springsteen himself – has been stalled in several attempts at the federal level by Live Nation’s massive lobbying dollar, wouldn’t directly address dynamic ticket pricing processes if it were passed – just require that artists and promoters be transparent about the fees up front.

Will fans of The Boss be able to lead the charge against the massive inflation going on in ticketing right now? Only time will tell.

For now, it’s likely that the best deal on Springsteen 2023 tour tickets might actually be on ticket resale markets. Ticket purchase links and full tour details are included below:

Europe and the UK (UK dates in bold – on sale this week, EU dates already on sale)