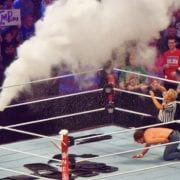 After slowly climbing through the sales ranks all week, WWE’s Wrestlemania XXXIV finally reached the top spot among yesterday’s sales data according to TicketClub.com. With roughly six weeks to go before the event takes over New Orleans’ Superdome, fans are eager to get their hands on tickets for the... END_OF_DOCUMENT_TOKEN_TO_BE_REPLACED