Bernadette Peters1 Bette Midler9 broadway321 Hello Dolly!25 Victor Garber1
Broadway hit Hello, Dolly! will see a casting transition at the start of next year. According to Variety, Bette Midler, who plays the lead...

Broadway hit Hello, Dolly! will see a casting transition at the start of next year. According to Variety, Bette Midler, who plays the lead of Dolly and her co-star, David Hyde Pierce will step down as Bernadette Peters and Victor Garber take on their roles.

The Tony-winning revival of Hello, Dolly! began last spring, and boasting the legendary Bette Midler as the star of the show has kept it one of the top-selling on Broadway ever since. There has been much speculation this summer about who might take on that role after Bette. Rumors cited big names like Dolly Parton and Sutton Foster, but even producer Scott Rudin himself commented on the matter that, “There’s no replacement for Bette”. 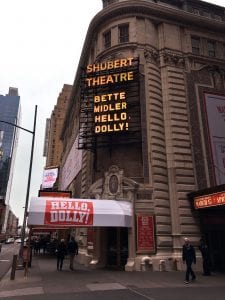 However, if a replacement must occur, Bernadette Peters certainly has the Broadway resume to fill those shoes. Peters’ career spans five decade, including roles in Follies, most recently, and the original stagings of Sunday in the Park with George and Into the Woods. She’s been nominated for seven Tony Awards, winning two, and eight Drama Desk Awards, winning three.

As for Garber, he may be better known for his television and film work (Legends of Tomorrow, Alias, Titanic), but he has an impressive theater background, as well. His most notable roles include those in Deathtrap, Noises Off, and Present Laughter.

So although a household name like Bette will be a tough act to follow, avid theater fans will likely keep sales well afloat for Hello, Dolly! for at least a few weeks post-casting change. After that, it would be hard to imagine the show pulling the same overwhelming numbers it did the first time around.

Midler and Pierce will perform their roles for the last time on January 14. The show will take a quick hiatus before Peters and Garber begin their run on January 20, with their opening night set for February 22.