After a Decade, Will Eventbrite Ever Exit “Startup” Mode?

eventbrite50 Mobile App11 Secondary Tickets14 Social media6
How many years have to pass before an up-and-coming startup becomes simply a struggling business? Founded in 2006, Eventbrite burst onto the ticketing scene...

How many years have to pass before an up-and-coming startup becomes simply a struggling business?

Founded in 2006, Eventbrite burst onto the ticketing scene as a self-service technology platform for events that allowed organizers to create pages, share them across their various social networks, and sell tickets to the event, all on in one continuous package.

Innovative for its time, it quickly acquired investors and took off: it now powers more than three million events per year and attracts 50 million active ticket buyers, according to its website, and has acquired several other smaller event management and ticketing sites since its inception. However, 11 years later, the company is still accepting “strategic investments”. This begs the question raised above – will it reach a point of self-sustainability?

Eventbrite profits through its three event organization products: Essentials, Professional, and Premium. An Essentials package will sell a single ticket type (general admission) on Eventbrite and its partner platforms for 1% and $0.99/paid ticket. A Professional package charges 2.5% and $1.99/paid ticket, but allows unlimited ticket types and provides sales analytics. A Premium package supplies rental equipment for box office and entry, on-site staffing, branded community pages, and more- pricing is customized per event. Free events are free to organize and share.

Seven years into their endeavor, Eventbrite purchased Eventioz- an Argentina-based online event registration software- and Lanyrd- a conference and event directory based in London, England- in 2013. They went on to purchase Entry Management RFID company Scintilla Technologies in 2015, and event management and ticketing platforms Queue, ticketscript, and nvite in the past two years. Most recently, Eventbrite made headlines in June with a $200 million acquisition of Ticketfly, a live event technology company and previous subsidiary of Pandora, though that deal led to some internal layoffs as the companies combined operations.

Given these acquisitions, Eventbrite is seemingly rounding out and growing up as a company. Why then, is this 11 year old company still being widely referred to as a startup? Bloomberg Technology reported in September, shortly after the Ticketfly merger closed, that digital payment service Square Inc. would team up with Eventbrite to process ticket purchases. The article’s byline read: “Ticketing startup to use Square’s platform for transactions”.

Some employees (or former employees) have expressed similar views on company review network Glassdoor, though in a less forgiving light. Many reviews questioned the company’s management abilities as well as the definition and growth of their product and company goals. 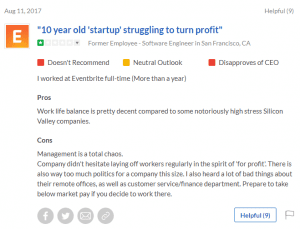 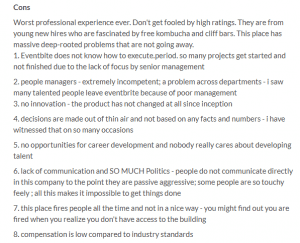 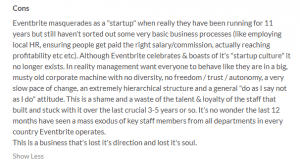 “No innovation – the product has not changed at all since inception”, one critic wrote. “A very slow pace of change, an extremely hierarchical structure…this is a business that lost it’s direction,” says another. One calls its ex-employer “a 10 year old ‘start up’ struggling to turn profit”.

This term – “startup” –  has been as widely debated as it is thrown around as a descriptor; some say it is defined by age of a company, others by valuation, others by the number of employees. Adora Cheung, cofounder and CEO of Homejoy once famously said that “startup is a state of mind”.

Adam D’ Augelli, an associate at True Ventures- a San Francisco venture capital firm- told Business Insider that a company is a startup until it finds product or market fit and has begun to scale. “Until that happens, a company is exceptionally nimble – small engineering team – hacking away trying to solve a problem,” says D’Augelli. “Once the company starts to scale and the model works – the company begins to have a more bureaucratic structure which results in processes that inherently make it less startup like.”

Whether or not Eventbrite can be labeled a “startup” is entirely up to the individual applying the label, but that it is still receiving investments after all this time does raise questions. It has certainly had success in acquiring a toehold in a difficult to enter market, but the question remains – will Eventbrite ever stand on its own two feet?