Alberta2 Bots19 Canada26 resale17
Following in the footsteps of Ontario, the Canadian province of Alberta has announced legislation aimed at restricting the resale of tickets, according to multiple...

Following in the footsteps of Ontario, the Canadian province of Alberta has announced legislation aimed at restricting the resale of tickets, according to multiple news sources. The restrictions are far less comprehensive than more populous Ontario, due to the western provinces’ consideration of itself as a smaller market, according to Service Alberta Minister Stephanie McLean. 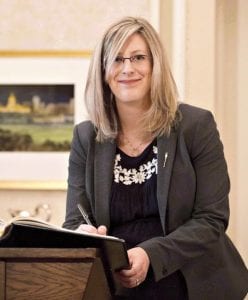 Service Alberta Minister Stephanie McLean is sworn in as a new cabinet minister in Edmonton in a February 2, 2016 file photo. Alberta is bringing in new rules to protect consumers if they get shut out by bots when trying to buy concert or show tickets online.THE CANADIAN PRESS/Jason Franson

“We want this to be an attractive place for artists to come, and there are so many different interests… that influence acts coming to Alberta,” she said. According to The Globe and Mail, McLean categorized the moves as a “first step” and that the province would be open to additional regulations if necessary. “We do know there’s one thing everyone holds in common, and that is a concern around bots.”

Specifically, the proposed legislation would ban the use of rapid purchase “bot” software. It proposes to force ticket vendors like Ticketmaster to proactively cancel tickets purchased using the bot programs, which are designed to circumvent ticket limits and grab tickets faster than humans can during the initial onsale period. It also would require resale marketplaces to refund residents if an event is canceled, or if a ticket is invalid when a user attempts to use it to enter a venue. Such regulation would be redundant for the overwhelming majority of secondary ticketing operators – at least the ones operating as legitimate businesses. Those found in violation of these protection could be subject to fins up to $300,000 as well as jail time.

“We’re simply going to start off by holding [ticket sellers] accountable for policing their industry,” McLean says. “Fans deserve a fair shot at tickets to see their favorite artists.”

These restrictions are far short of those Ontario is attempting to force through. The province – dominated by the Toronto marketplace – originally sought to ban bots, force primary sellers to disclose the actual number of tickets available to the public for sale, and implement a price cap on resale. After fierce lobbying by promoters, venue operators and primary sellers, the transparency requirement was dropped suddenly from the legislation.