The Overtones Singer Dies, Tour Dates Are In Question

The Overtones singer Timmy Matley died earlier this month, and the heartbroken band cancelled tour dates throughout the rest of April.

Matley, 36, was battling skin cancer before his death; he was diagnosed with stage three and eventually stage four malignant melanoma in 2016. On May 3, he was planning to hold a charity skydive to raise money for The Royal Marsden Cancer Charity. He explained on his Just Giving Page that when he first found a lump in his underarm, it was a very frightening and scary time for him and his family since there had been no other warning signs. Although his former scans looked really positive with most of the cancer in regression, he passed away, shocking everyone.

On April 11, the band released an official statement via social media:

“It is with the greatest sadness that we have to announce that our dear friend and brother Timmy has passed away. We know this news will be as heartbreaking for you all as it is for us. We appreciate your love and support at this difficult time.” 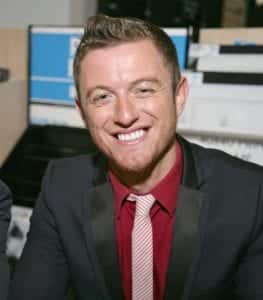 The U.K. band was overwhelmed by the amount of support from fans over the past few weeks and asked that everyone continues to respect the privacy of Matley’s family and they will “be in touch soon.”

So far, last night’s show in Potters and Saturday’s show in Bedworth have been cancelled. However, the band has a handful of other dates throughout the U.K. in June and July.

The summer dates are still scheduled, but fans aren’t rushing the band; many sent positive messages to members Mark Franks, Mike Crawshaw, Darren Everest, and Lachie Chapman. When the band said they will keep fans updated soon, they received hundreds of responses, saying they can take all the time they need. Matley’s Just Giving page also surpassed his fundraising goal, with over $7,400 raised out of his $5,000 target goal. Several people donated and shared stories along with kind thoughts about the singer.

At Matley’s funeral service last Friday, Chapman sang a tribute for Matley, and afterwards, the group took a drink in honor of him, posting a picture with the caption “To our brother.”

The following dates (as of right now) are posted below.