The guitarist behind the rock band Thirty Seconds to Mars, Tomo Miličević, has announced his departure from the group, making the band a duo.

Fans have speculated about Miličević quitting, since he was absent on a slew of European tour dates, however it wasn’t until yesterday that he officially made the announcement via a note on Twitter. He started off by saying that he “doesn’t know how to explain in a note how I could have come to a decision like this.” Throughout the statement, he continues by explaining what a privilege he had to be a part of the band and apologized for taking so long to make the announcement.

“I want to say thank you to Jared [Leto] and Shannon [Leto] for allowing me the privilege to be a small part of their dream and to have been able to share the stage with them for so long,” he wrote. “I’ll cherish the moments we had together and I’ll have love in my heard every time I think of those days until I draw my final breath.”

As for his fans, he encouraged them to not be divided over this decision because it will be “good for everyone.”

“Remember something very important, this band brought ALL of us together, me included,” he continued. “So, even though I’m leaving the band my spirit will never leave the family, and you never know, maybe you’ll see me sitting next to you on the lawn somewhere sometime just singing along…”

Read the full statement below: 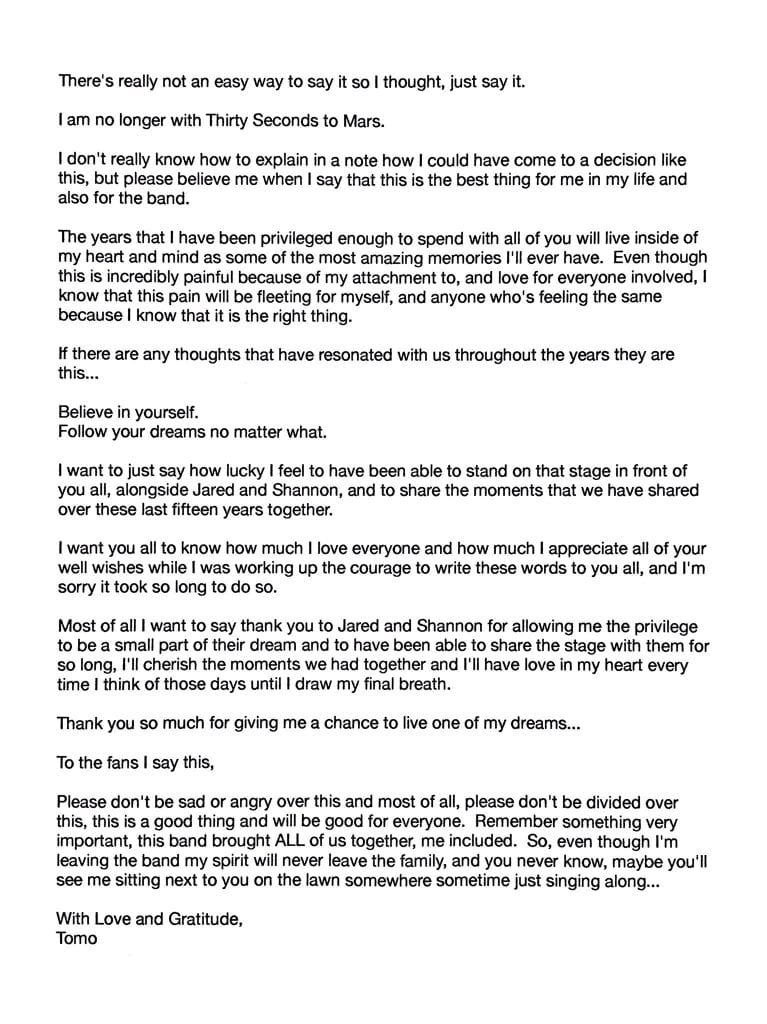 At this time, the reason for Miličević’s departure has not been revealed.

Currently, the band is on The Monolith Tour and will play a show tonight in Detroit, Michigan. The trek continues with shows in cities like Chicago, Cleveland, Philadelphia, New York, Tampa, Salt Lake City, San Francisco and Phoenix before wrapping up at Camp Mars Music Festival in Malibu, California on August 12. They will be joined by artists Walk The Moon, Misterwives, K.Flay, Joywave, and Welshly Arms on select dates. Following the North American leg of the tour, the band will visit Europe from August 17 through September 12.

Earlier this year, Thirty Seconds to Mars released their fifth studio-album, America, which is their highest-charting album on the Billboard 200, clocking in at No. 2. The record features the single “Dangerous Night” and their latest hit, “Rescue Me,” which goes along with a newly released music video. This is their first LP since the 2013 album, Love List Faith + Dreams, following the band’s smash hit “The Kill.”

Check out the full list of tour dates below and visit Ticket Club to find tickets to a Thirty Seconds to Mars show this year.