Popstar Pink cancelled a slew of shows in Sydney, Australia right before she was supposed to take the stage, leaving fans upset that management and the concert promoter didn’t let concertgoers know earlier.

Last week, Pink announced that she would be rescheduling the Sydney show on August 3 at Qudos Bank Arena because of an upper respiratory infection. Live Nation released a statement that she was taking medical advice to not perform, but all future dates will go on as scheduled.

However, she had to pull the plug on more dates as the week progressed — cancelling shows on Monday and Tuesday as well. On Monday, the announcement of the cancellation came very late, just two hours before the singer was slated to perform.

Fans took to Twitter and Instagram, expressing their anger toward the last-minute cancellation after traveling across the country for the show.

@theprojecttv Hi Carrie, the cancellation of Pinks concert was reasonable but – there were people travelling to the concert from well out of Sydney who only found out en-route. A bit disappointing for them….

A bit unfair for @BickmoreCarrie to have a go at @Pink fans upset at last minute cancellation: What if you left work early, paid hundreds for tickets for you and the fam, caught public transport to the venue & didn’t find out until you got there? @theprojecttv #TheProjectTV

@Pink we’re so disappointed! We came all the way from Mexico just for today’s show and we learnt in the arena that it had been postponed! My mom, my French friend and I, all the money and efforts for nothing!!! So sad!! We’re leaving Sydney on Thursday

2 hours notice and several hundred dollars out of pocket and at 9am u where well.? Not likely! I know your sick but how about cancelling gig sooner and we could get hotel room costs back or flights pic.twitter.com/R0K2EtM3FM

“On Monday, we were absolutely planning on going ahead with the show, and about 20 minutes before I left for soundcheck, I was rushed to the hospital, in excruciating pain,” Pink wrote in an Instagram post. “That was the reason for the late cancellation. It was out of anyone’s control, and of course, wasn’t planned that way.” 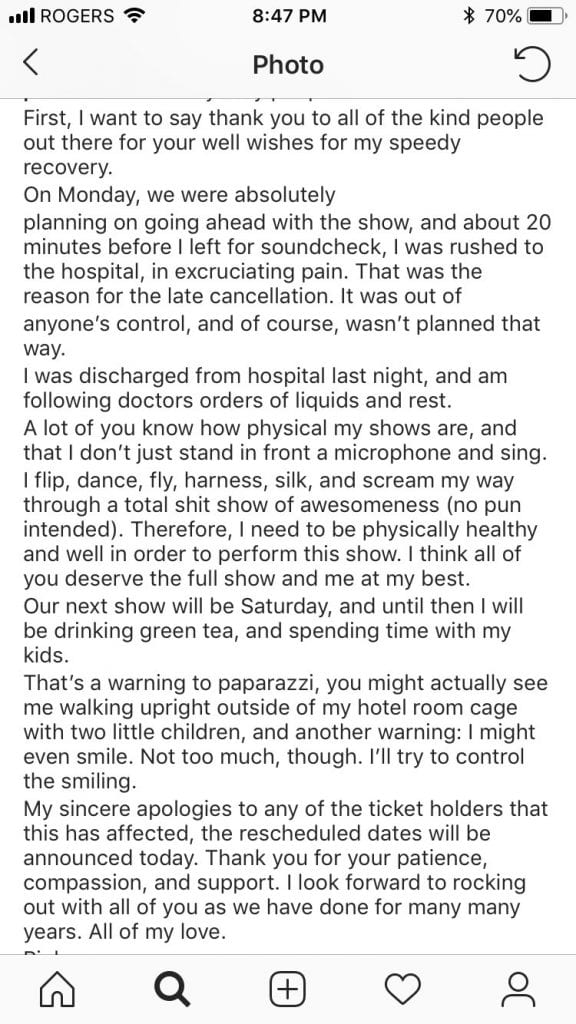 After seeing Pink’s update however, many of her fans were kind and reassuring that the singer should take all the time she needs before heading back to the stage.

You shouldn’t have to explain yourself. Some people need to realise the world doesn’t revolve around what they want. Shit happens. I hope you’re feeling 100% again real soon. Rest up and enjoy some time with your kids. Can’t wait to see you again in Melbourne ??

Take your time and get better…. have my postponed tickets in my hand. You name the day and the time and i’ll be there cheering you on (happy and healthy as you should be ) xx

In the past few days, Pink has also been criticized by the paparazzi after someone snapped a picture of her on the beach following the first cancellation in Sydney. Pink reposted the photo on her Instagram, saying that “I don’t need to clear this up, but out of respect for my fans I will attempt it.” She went on to explain that what the “parasite papparazi” did not show was her two doctors visits in Byron, antibiotics, steroids, medicine, and taking care of her children all at once. 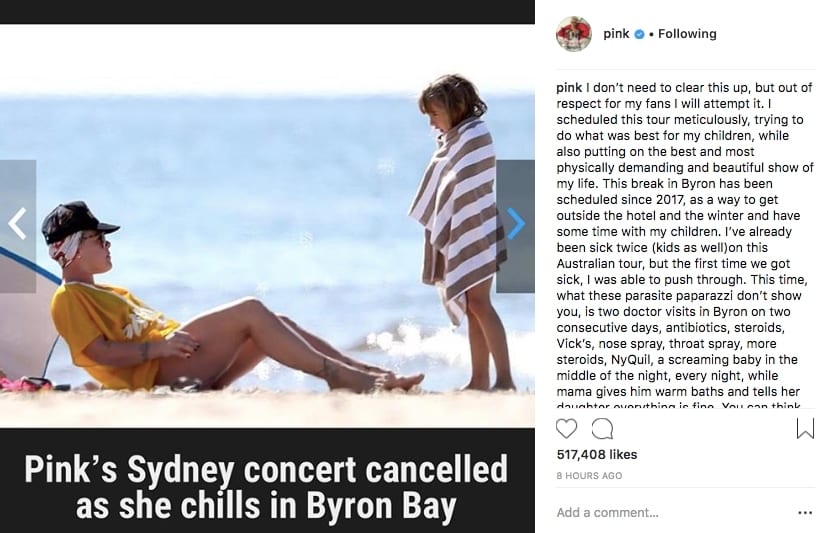 Many celebrities took Pink’s side, including Justin Timberlake, who jumped into the comments section of the post to say that “you won’t find a more hardworking, more authentically talented, and more thankful for her place on that stage and her fans than this woman.” 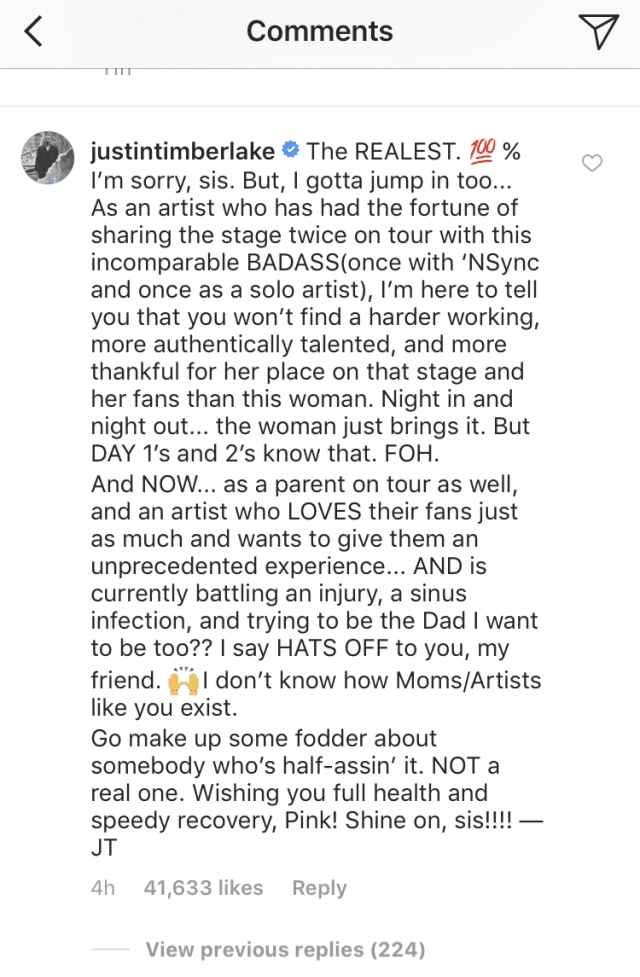 Pink said that her show this Thursday, August 9, will be the final cancellation, and she will be back on stage Saturday.

“Our next show will be Saturday, and until then I will be drinking green tea and spending time with my kids,” Pink said.

She apologized to ticket holders that were frustrated and found out about the cancellation last-minute, but promised to return to Sydney after the New Zealand leg of her tour to perform the postponed concerts. New Sydney dates will take place on August 24 as well as September 17-19.

“Thank you for your patience, compassion and support. I look forward to rocking out with all of you as we have done for many, many years,” she said.