6ix9ine6 David Hernandez1 Petition1 Protest\4 Tekashi 6ix9ine6
Students at the University of Central Florida are petitioning to cancel the Tekashi 6ix9ine concert at CFE Arena on September 22 because of the...

Students at the University of Central Florida are petitioning to cancel the Tekashi 6ix9ine concert at CFE Arena on September 22 because of the rapper’s recent crimes and convictions.

UCF reportedly won’t cancel the show because they say the venue has been hired privately. Nonetheless, students are accusing the university of “condoning” the 22-year-old rapper’s history. In 2015, Tekashi 6ix9ine, real name Daniel Hernandez, has been charged with a sex crime relating to a video posted by a 13-year-old girl online. He agreed to a guilty verdict of “felony use of a child in a sexual performance.”

In addition to this charge, Hernandez violated terms of his plea deal, in which he agreed not to commit to any other offences for two years. He has been re-arrested twice for allegedly chocking a 16-year-old in Houston earlier this year, and has joined a gang.

Noemi Teutsch, a student at UCF, told local news station WFTV that many of the students are “just as outraged as I am,” noting that “universities are supposed to be upholding certain moral standards.”

“As far as I’m concerned, they are endorsing, and they are condoning his behavior because they’re allowing him to come on campus to perform,” Teutsch said. ” I honestly think it’s ridiculous. It makes no sense whatsoever. Because at some point, you have to draw the line somewhere.’

Teutsch is leading the campaign, which urges students to sign a petition to boycott the concert. Already, the document has over 5,000 signatures, but the university has not made any efforts to cancel the event.

“What message is this decision sending to the general public, that an accredited educational institution will condone and encourage the presence of someone convicted with such an obscene crime?” the petition reads. “Why are they giving this person a pass? Did this fact not cross the the [sic] minds of staff at UCF, or see how it could severely damage the school’s image?” 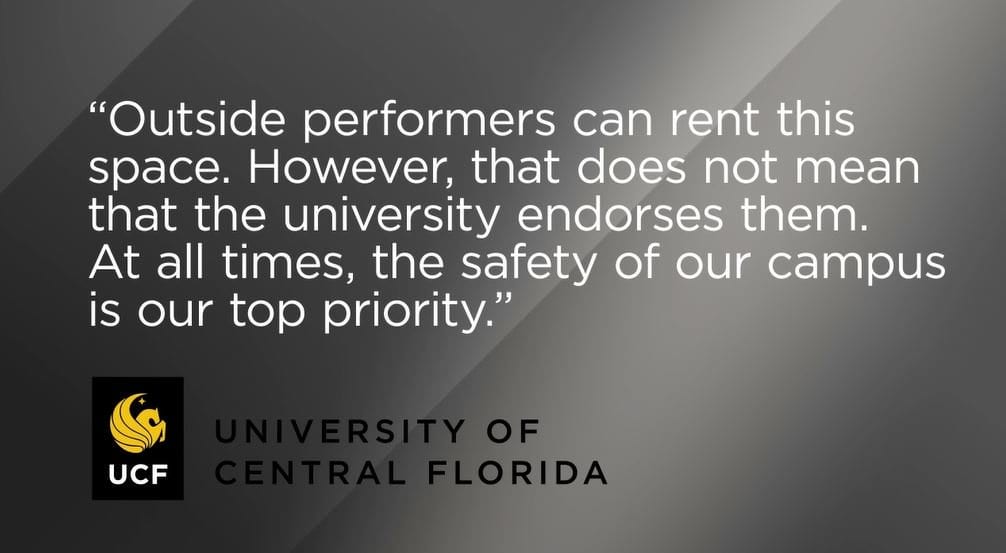 Students, Floridians, and more took to Twitter, expressing their anger of the concert.

Read about him. Besides this, he has been involved in numerous violent events, including shootings. This guy is nothing but trouble. Should something happen on campus, I hope UCF is willing to accept blame for the lack of safety.

yo @UCF @CFEArena y’all really wanna book the child raping trash @6ix9ine in my city?? how distasteful and disheartening https://t.co/Pl8nch83Aj

usually hate UCF but this guy is a real scumbag. do the right thing @UCF

ucf is literally all about their @ucfcares campaigns about sexual assault but are allowing a pedophile/child pornographer to perform!! wow. wild.

Teutsch urges people to sign the petition here. However, she noted that if the concert still does not get cancelled, she will organize a protest with her supporters.