Concert78 George Strait94 Houston Livestock Show and Rodeo20 Leaked Lineup1 lineup16 RodeoHouston7
The highly-anticipated concert lineup for RodeoHouston 2019 has been leaked online, which includes some of the top musicians in the industry. Last night, a...

The highly-anticipated concert lineup for RodeoHouston 2019 has been leaked online, which includes some of the top musicians in the industry.

Last night, a tweet surfaced online showcasing a day-by-day entertainment lineup of the 2019 rodeo. Rising country star Kacey Musgraves is rumored to kick-off the event on February 25, followed by performances from Brooks & Dunn, Luke Combs, and Tim McGraw. Latin popstars like Camila Cabello and Prince Royce are supposedly going to take the stage, along with alt-rock group Panic! at the Disco, rapper Cardi B, and EDM DJ Zedd. George Strait, the only confirmed artist right now, is slated to perform on the final day of the rodeo, March 17, with artists Lyle Lovett and Robert Earl Keen.

The Houston Livestock and Rodeo Show took to Twitter to address the leaked lineup, noting that fans would just have to wait until the official announcement on January 3 to see if these artists are actually on the bill.

Hmmmm, that’s a mighty impressive lineup. ? But is it the real lineup? We’ll have to wait until the Jan. 3 reveal to see! #RODEOHOUSTON

According to KHOU 11, none of the entertainers on the rumored list have conflicting events during their supposed slot at RodeoHouston, and a handful of them will be in the area ahead of the performance. While some Rodeo fans think the list could be real, others note that it has to be fake because Brooks & Dunn went their separate ways in 2010 and hasn’t played in Houston as a group since.

Earlier this month, the day-by-day entertainment genres were announced. Each genre varies per night; there are 12 country shows, a handful of pop and rock performances, and select EDM, Spanish pop, hip-hop, and norteño shows. The 2019 rodeo will run for 21 days straight from February 25 to March 16. Weekday rodeos start at 6:45 p.m. with entertainers starting at 8:45, and weekend rodeos start at 3:45 p.m. with performances beginning at 5:45.

Check out the leaked lineup below, and lookout for the official lineup, due January 3. 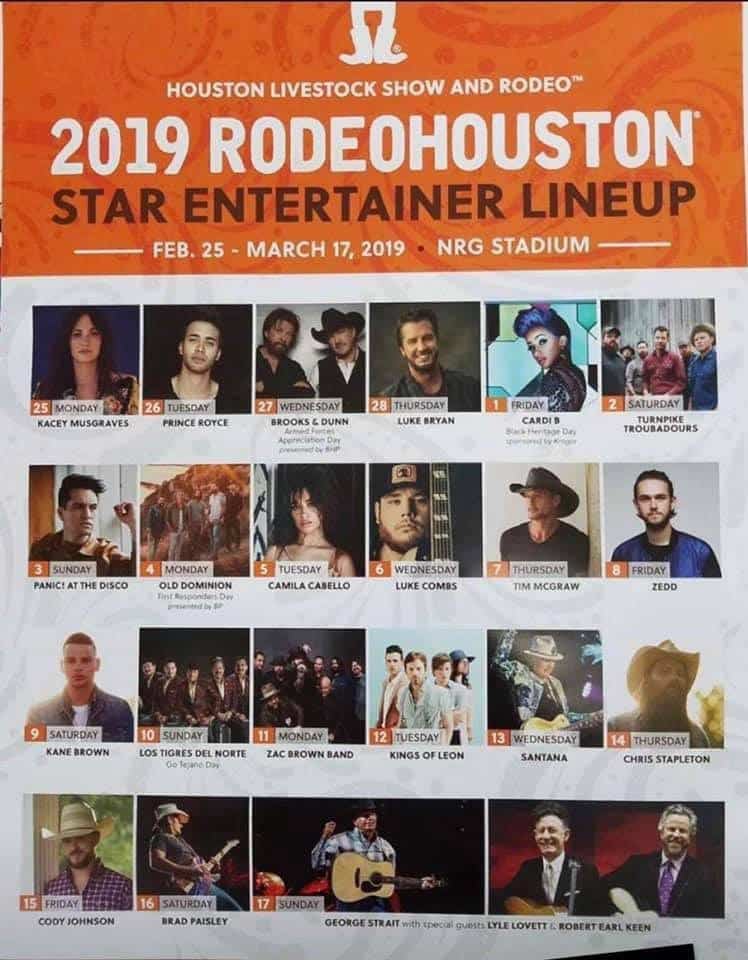