Marcus Stern of Any Tickets Joins US Minority Ticketing Group

The US Minority Ticketing Group is proud to announce Marcus Stern as a new member of the organization. Stern is the co-owner of Any Tickets, one of the most popular and well-known brokerages in the country. At age 17, he was working at a nursery when his sister, who was working for her father at Up Front Tickets in Houston, called him and asked him to try out the ticket business. He ditched the nursery job and began working for Up Front Tickets, learning the ins and outs of the industry.

Stern started in 1994, the year that the Rockets played the Knicks in the NBA Finals. Several years later, he embarked on his personal ticket journey by wholesaling tickets to his own broker contacts. The biggest brokers he wholesaled to included Tom Patantia from Select A Ticket and Ken Solky from Designer Tickets. They were just the start of his success.

In 2001, Stern partnered with Chris Bonner, a friend and one of the people who obtained tickets for Stern to wholesale. Stern and Bonner made a phenomenal team. Their business exponentially grew as they acquired more and more tickets. Two years later, they partnered with Jim Barr, a long-time expert in the industry. Barr brought organization and a network of contacts to the team. Barr recently retired from Any Tickets but is still an advisor for the company and is actively involved in the Super Bowl and other major sporting events. In 2008, Any Tickets gained Deric Margolis as another asset to the company. Margolis initiated several internal profit centers for the company. Any Tickets grew at around 8 percent each year from 2009 to 2016, and in 2019, they expect sales to be well over $150 Million.

From a seasonal nursery worker to one of the biggest ticket brokers in the country, Stern’s story is one we can’t forget. He reminds us how important collaboration and teamwork are to success.

“Our company is successful because we surround ourselves with good people,” he said. “Everyone has a different area that they specialize in. We work together, bounce ideas off one another, trust each other and much more.”

As a word of advice for other brokers, Stern emphasizes the importance of doing the right thing, transparency, and sticking to your word, noting that “your word is everything in this industry.” 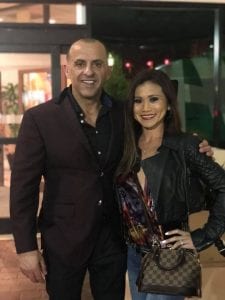 Stern and his wife.

Several years ago at the Phoenix Super Bowl, Any Tickets lost an average of $4,000 per ticket for 400 seats but still made sure to fill every order that they took that year. Stern takes consumer transparency and obligation very seriously when he says, “we would rather go bankrupt before we bust an order.” Since then, his company has created a broker affiliate program that discloses their sales and profits in full transparency to their partners.

Stern’s words echo throughout his personal life as well as his professional one. He’s a father to four children, Tyler and Reagan, and has two children, MJ and Mya, with his wife, Susanna. He loves and values his family, fitness, and charity and says “the one thing you can’t buy is good health.” Any Tickets are proud supporters of Gigi’s Playhouse, the Southwest Steers, and several other local Houston charities. The USMTG is so excited to welcome such an all-around admirable new member!