The third Tailgate N Tallboys event this September in Illinois has switched venues with just a month before the concert, leaving fans upset with ticket prices and seating arrangements that come with the change.

Tailgate N Tallboy’s two previous events, held in June and July, took place over three days on the riverfront at Riverfront Park in Peoria. VIP and general admission tickets were available for the third show, set to be held on September 14th. However, promoter Inked Entertainment announced that “after many requests for seating at the concert,” the gig has just been moved to the Civic Center Arena to “fit the audience much more comfortably.”

Fans were not happy with the venue change, as many were looking forward to watching the show outside, without the restriction of assigned seats. Not only are the seats now indoors, but new seating assignments were announced. VIP ticketholders have the option of keeping their current tickets to stand in the general admission area, or exchange their tickets for $10 more for a main-floor seat. Fans who paid for cheaper general admission seats for $65 will now have to either keep their seats in the nosebleeds of the upper bowl or exchange them for seats in the back of the lower bowl.

Fans took out their frustration and confusion on social media: 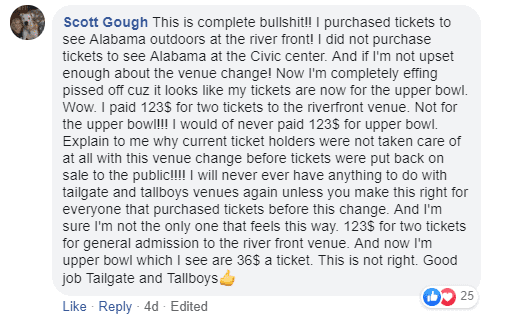 The PJStar reached out to Ink Entertainment for clarification, where the promoter stated that general admission ticket holders will not have to pay an extra $20 to exchange for better seats in the upper bowl, as the transfer will be free of charge. However, if ticket holders want to get a seat in another section, like the front of the lower bowl, they’ll end up paying about $9 more than someone who could buy a seat now off the ticketing website.