Cornell University1 Gov. Andrew Cuomo1 new york50 St. John's University1 Syracuse University1
College sports fans in New York will have no choice but to stay at home this fall, as Governor Andrew Cuomo has announced that... 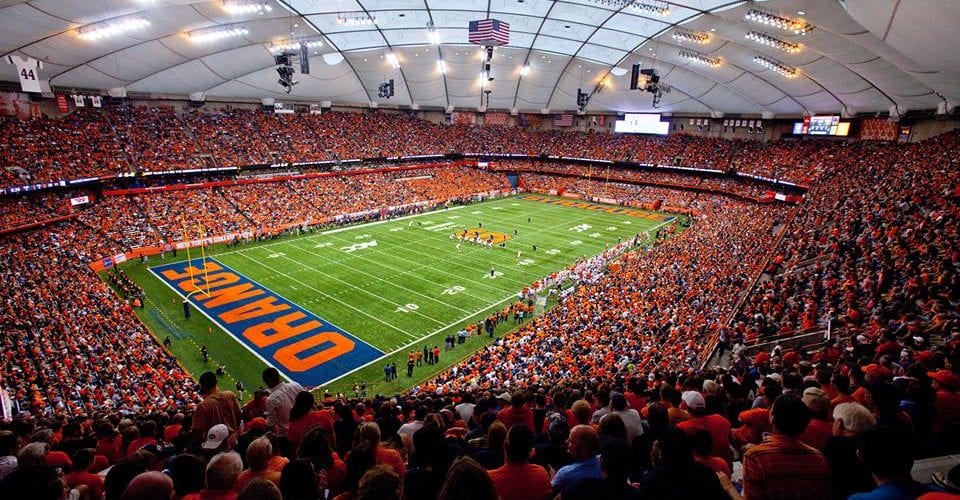 College sports fans in New York will have no choice but to stay at home this fall, as Governor Andrew Cuomo has announced that no fans would be allowed at intercollegiate sporting contests for now. The move mirrors the Governor’s decision related to professional sports in the state – the games can go on, but only for TV cameras.

New York was the epicenter of the early stages of the coronavirus outbreak in the United States, with more than 32,000 deaths attributed to the virus according to statistics compiled at worldomters.info. Cases have slowed down dramatically since an April peak that saw over 10,000 cases a day in several instances, however officials are remaining cautious as they reopen in hopes that numbers can stay low in the Empire State.

A number of schools in New York have already seen their schedules altered by conference decisions to go league-only in the fall like the Big East (St. John’s) or call off sports altogether like the Ivy League (Cornell). West Point saw many of its sports go conference-only due to its Patriot League affiliation, however football is unimpeded due to its participating as an independent in the FBS rather than within the PL’s FCS slate.

Syracuse, which plays in the Atlantic Coast Conference, is awaiting a league decision on how it will approach the upcoming fall. It is also hoping for “clarification” from the Governor regarding whether or not it can host fans at the Carrier Dome, which is scheduled to debut a newly renovated interior this year.

“The health and safety of our student-athletes, our fans, our campus community and the broader Central New York community is our chief priority,” Syracuse athletic director John Wildhack said in a statement Tuesday evening. “We appreciate and support Governor Cuomo’s continued commitment and ongoing efforts to keeping our communities safe. We will seek further clarification regarding the opportunity to have fans at our games and move forward appropriately under the guidance of the state.”

The school reportedly hopes it can have some portion of the Carrier Dome host fans, and has modeled seating plans ranging from 25-50% of its capacity, with season-ticket holders and students to receive priority if it gets the go-ahead.