Greg Kinnear will make his Broadway debut in January, taking over the lead role of Atticus Finch in To Kill a Mockingbird. Kinnear will take over the role from Jeff Daniels, who originated the role in the Aaron Sorkin adaptation of the classic novel and returned to Broadway for its reopening this fall.

Kinnear will begin performances on January 5, 2022. Daniels’ final show is Sunday, January 2. That timeline had been planned since the initial announcement of the return of both Daniels and co-star Celia Keenan-Bolger for the reopening, which went up on October 5. Both were nominated for Tony Awards during the initial run of the play, with Keenan-Bolger winning for best performance by an actress in a featured role in a play. In total, the show earned nine Tonys, but just won the single one for its lead actress. Ed Harris has also appeared in the Atticus Finch role, taking over from Daniels after the initial run until the play was shuttered along with the rest of Broadway in early 2020. 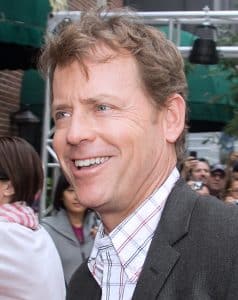 Kinnear was nominated for an Academy Award for his supporting role in the 1997 film As Good as it Gets, portraying the gay neighbor of Jack Nicholson’s protagonist. He first rose to fame in the early 1990s as the host of Talk Soup on the E! network, then began appearing in films in the middle of that decade. Other notable projects have included You’ve Got Mail, Mystery Men, Nurse Betty, We Were Soldiers, Auto Focus, The Gift, Someone Like You, Little Miss Sunshine, Baby Mama, and House of Cards. He was nominated for primetime Emmy Awards for performances on Modern Family and The Kennedys, which saw him portray the late President John F. Kennedy.

Based on the seminal novel by Harper Lee, Mockingbird tells the tale of racism and injustice in the American south. The story tells the tale of lawyer Atticus Finch, who defends a black man wrongly accused of sexual assault, viewed from the perspective of his young children. Sorkin’s adaptation made its debut on December 13, 2018. It subsequently became the highest-grossing American Broadway play of all time, recouping its initial investment after 19 weeks. Its return, taking place after the fall from grace of mega-producer Scott Rudin, came under the leadership of Orin Wolf.