Rising electro-pop artist Billie Eilish announced the first leg of a world tour following the release of her debut album, WHEN WE ALL FALL ASLEEP, WHERE DO WE GO? later this year.

Following her European outing and highly-anticipated performance at Coachella Valley Music & Arts Festival, Eilish will kick-off her headlining When We Fall Asleep Tour in San Francisco, California on May 29. From there, she’ll make stops in cities like Chicago, Toronto, and Boston, playing renowned theatres like Radio City Music Hall in New York, Los Angeles’ Greek Theatre, and The Met Philadelphia before wrapping-up in San Diego on July 13.

Throughout the trek, she’ll be joined by her brother and collaborator Finneas, along with rapper Denzel Curry. The North American leg is the first round of dates announced on the world tour, and more dates are expected.

Eilish, 17, has consistently pushed the boundaries in the music industry and spun society’s idea of a “typical” young popstar. She’s already sparked attention solely with a string of singles and the EP dont smile at me. Her debut single, “Ocean Eyes,” along with “Lovely,” her collaboration with Khalid, catapulted her into the scene. From videos for “you should see me in a crown,” where she has a spider crawling out of her mouth, to “when the party’s over” with black ink bleeding from her eyes, she definitely knows how to capture an audience. So far, her music has garnered 4.5 billion streams.

WHEN WE ALL FALL ASLEEP, WHERE DO WE GO? is due March 29 via Darkroom/Interscope records and will feature Eilish’s latest single, “bury a friend.” Singles “you should see me in a crown” and “when the party’s over,” which capture her unique, memorable sound, will also be found on the record.

Check out Eilish’s full list of upcoming tour dates below. 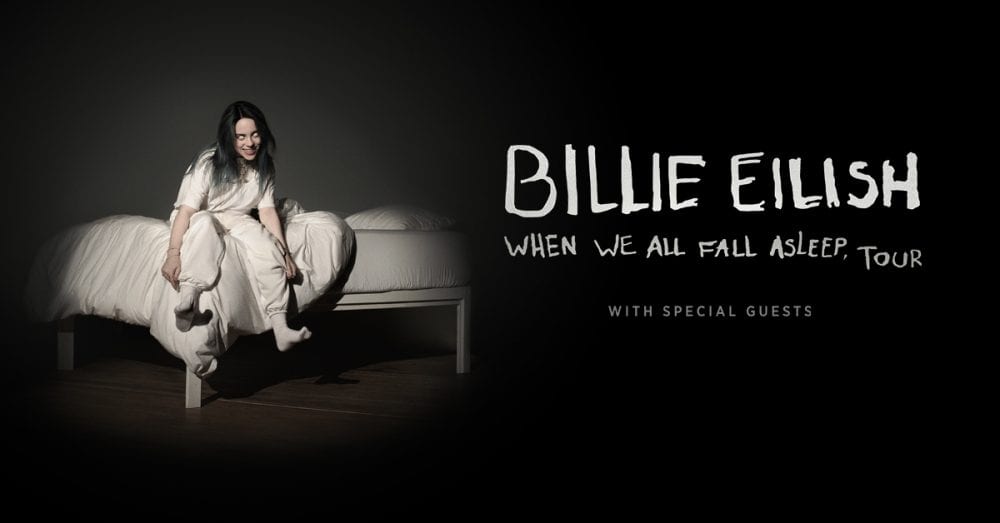 Billie Eilish “When We All Fall Asleep Tour” 2019