The Oakland Raiders and Green Bay Packers are slated to play a pre-season Week 3 game next month at a stadium in Winnipeg, but tickets aren’t selling well. However, organizers are calling the game “premier” and won’t lower the expensive prices.

The game is set to take place on August 22 at the 33,000-seat IG Field, which is home to the CFL’s Winnipeg Blue Bombers. According to the CBC, the NFL and Canadian-based promoter On Ice Entertainment Ltd. set the ticket prices. The cheapest seats, priced at $75, reportedly sold out quickly, along with all 40-plus suites. However, some tickets are priced up to $340 before taxes and fees, leaving the final all-in cost up to $439 for one seat.

Ticketmaster’s seating map shows that thousands are still available for the pre-season game, and it’s evident that some fans just aren’t willing to pay that much. 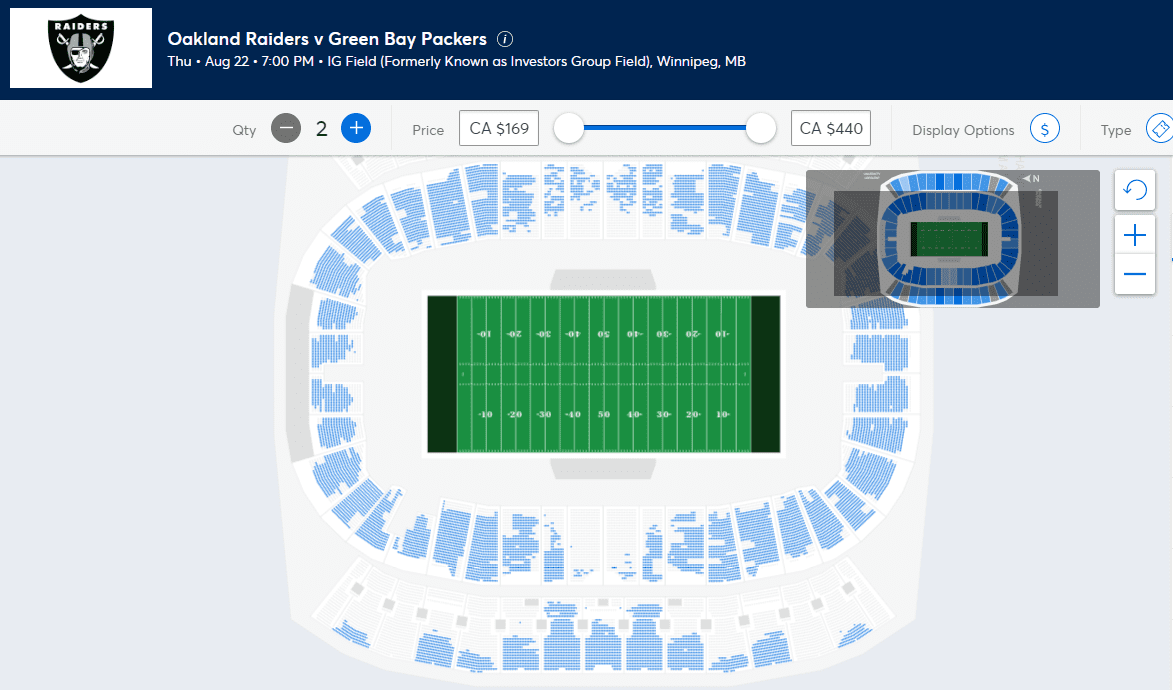 One Bombers season ticket holder, Greg Payonk, had a three-day window to buy tickets to the NFL exhibition game before it went on sale to the general public, however, he can’t justify spending that much money on a ticket, noting that while the game will feature the quarterbacks and some players, “mostly it’s going to be the rookies that are trying out.”

Promoter John Graham told the CBC that they will start the local marketing push next week in order to give fans more details on the “premier game” and other activities surrounding the match. As for prices, he believes that there will be a “good push” going into the final month.

“We’re not trying to suck the life out of anybody,” Graham said. “To bring these teams in and to do the conversion and everything else, that’s what a premium sporting event costs.”

The NFL last played in Canada when the Buffalo Bills played eight games in Toronto from 2008 to 2013. Similar to this situation in Winnipeg, there were initial slow sales, causing prices to be reduced over time. Graham revealed that sales revenue is just under half of the stadium’s capacity, not including the suites. He noted that this particular game is different than a normal preseason match and he does not plan on cutting prices ahead of the game, reiterating that “those are the prices.”