The Grammy-nominated folk rock band The Avett Brothers will return to North Carolina’s Azalea Festival in 2020.

The festival is set to take plan on April 4 in Wilmington. This will be The Avett Brothers’ fourth time performing at the fest – they’ve headlined in 2011, 2013, and 2016. The group will follow this year’s headlining artist, rapper Ice Cube, who brought rap selections from his 30-year career to the stage, Star News reported.

Organizers took to Twitter to share the news earlier this week, revealing a special discount sale for ticket purchased before October 19. 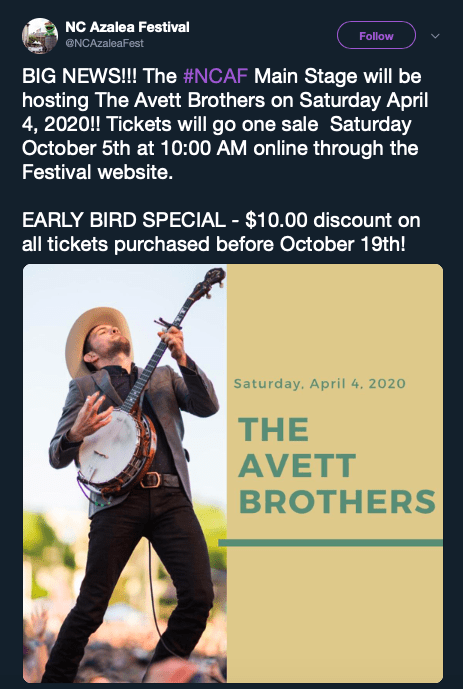 Azalea Festival has emerged as Wilmington’s premier event, known as the largest celebration of its kind in the state. Organizers promise live entertainment, festival galas, and Souther hospitality, noting that “for the community pride and springtime pageantry, the North Carolina Azalea Festival has no equal!” While more acts for the 2020 event will be announced in the coming months, tickets head on sale tomorrow, Saturday October 5.

This is the latest stop in The Avett Brothers’ schedule; the group is currently on their 2019 cross-country tour, which includes stops in Nashville, Atlanta, and Madison. They also revealed some exciting news today, dropping their ninth record, Closer Than Together. The LP includes previously-released singles “High Steppin'” and “Bang Bang,” which follows 2016’s True Sadness. Additionally, their music will be featured in a new musical, Swept Away, next year.