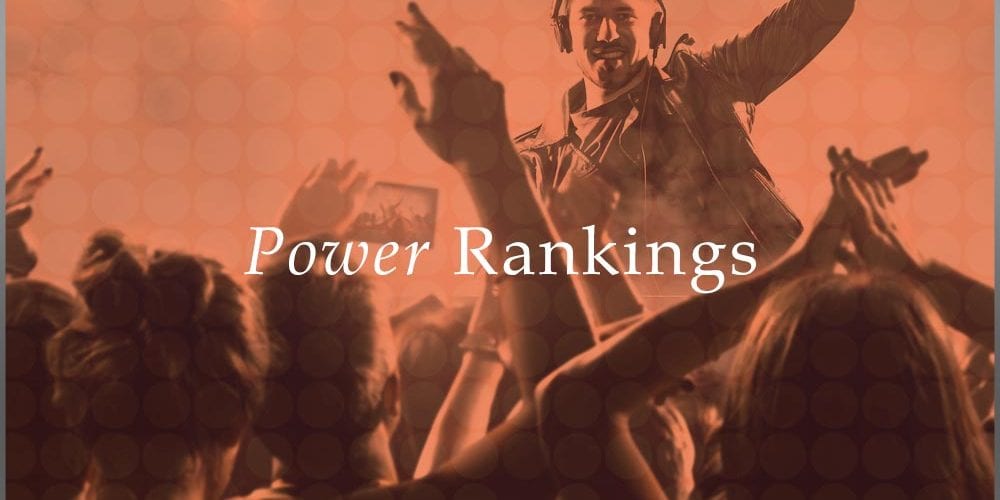 Beyoncé marches her Formation World Tour onto the event rankings 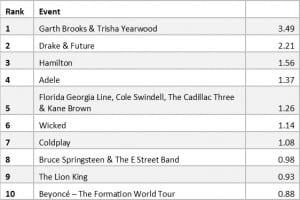 Making her way into the No. 10 position in this week’s TicketNews ® exclusive event rankings is pop icon Beyoncé. With a tour in full swing, a new album titled ‘Lemonade,’ and a recently aired charged up performance at MTV’s VMA awards, dedicated fans showed their support by helping the songstress round out the rankings listings by snapping up tickets for her wildly popular world tour.

Another newcomer to the top 10 event rankings this week is legendary rocker, Bruce Springsteen who is currently on his ‘The River Tour,’ with The E Street Band. Known as one of the best-selling artists of all time, the singer just finished a record breaking concert at the MetLife stadium where he performed for a staggering 4 hours and 1 minute.

The summer long tour will finish up with upcoming stops at Nationals Park, the House of Blues in Orlando, and finally at Citizens Bank Park.

Hip-Hops artists, Drake & Future, who are on their ‘Summer 16’ tour were able to show their star power by staying in their No. 2 spot, while songstress Adele dropped out of the No. 1 position, but instead claimed the No. 4 position this week. Rock group, Coldplay fell to the No. 7 spot from last week’s No. 4.

With the addition of several shows last week Garth Brooks was able to make his way back onto the charts this week into the No. 1 position, while supportive fans helped the Florida Georgia Line tour into the No. 5 spot.

Even though the rankings were dominated by concerts, Broadway favorites still made it into the rankings this week with the musicals, ‘Hamilton,’ ‘Wicked,’ and ‘The Lion King,’ coming in the No. 3, 6 and 9 positions. 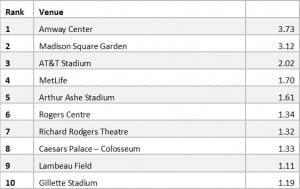 Getting a boost with a 4 tour date announcement from Garth Brooks and his wife Trisha Yearwood in October, the Amway Center landed grabbed the coveted No. 1 position in this week’s exclusive TicketNews ® venue rankings. The indoor arena, home to the Orlando Magic, will host the power couple on October 7, 8, 9 and 12th. The venue also got a boost in the rankings from NBA preseason ticket sales with hovers just around the corner.

Even with beloved quarterback, Tony Romo out with a back injury for an unspecified amount of time, the AT&T Stadium (formerly the Dallas Cowboys Stadium), continues to sit in No. 3 position while Madison Square Garden lost its top spot and moved in the No. 2 position this week.

The US Open Tennis Championship which began this week, moved the Arthur Ashe Stadium, in Flushing up to the No. 5 spot from last week’s No. 7, and the Toronto Blue Jays who are ranked No.1 in the American League MLB standings, landed their home stadium the Rogers Centre in the No. 6 position.

The award winning Broadway smash hit musical, ‘Hamilton,’ kept the Richard Rodgers Theatre in the rankings this week in the No. 7 spot up from last week’s No. 8, while Caesars Palace – Colosseum, nabbed the No. 8 spot with upcoming shows featuring Mariah Carey and Celine Dion.