Sports fans the world over have their first crack at picking up 2018 FIFA World Cup Russia tickets on Thursday at 12:00 (Moscow time – 5:00 a.m. on the east coast of the U.S. and 2:00 a.m. out west). The event, which takes place from June 14-July 15 of next year at locations throughout Russia, will have tickets ranging from about $100 for the least expensive seats at pool play contests to just over $1,000 for the premium seats for the finals in Moscow.

Purchasing of tickets for the world’s most popular sporting event will consist of three phases, the first of which begins tomorrow.

During the first period of sales phase 1, which starts on 14 September and finishes on 12 October 2017, fans will be able to submit their ticket applications. During this sales period, it will make no difference whether they submit their applications on day 1, the last day or any time in between, as all applications will have the same chance of being successful. In cases where the number of tickets applied for exceeds the available inventory, tickets will be allocated by a random selection draw process. All successful, partially successful and unsuccessful applicants will be duly notified of the outcome of their applications by 16 November 2017.

Sales phase 1 concludes with the period from 16 November to 28 November, during which tickets will be allocated on a first-come, first-served basis.

Tickets purchased during sales phases 1 and 2 will be delivered free of charge to fans in the weeks leading up to the tournament, with deliveries planned to start in April/May 2018 (subject to change).

Fans will also have a final chance to secure tickets during the last-minute sales phase, which will be implemented on a first-come, first-served basis from 18 April to 15 July 2018, the day of the 2018 FIFA World Cup™ final. 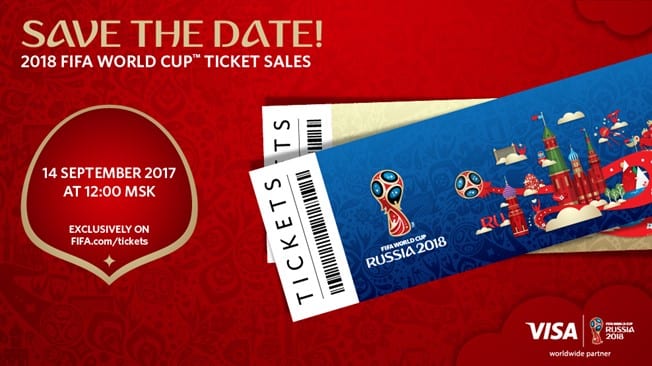 “We have put in place a ticketing system that will enable all fans a fair chance to secure tickets. Throughout history, fans have made a key contribution to the fascination of the FIFA World Cup. Russia promises to be a unique continuation of this history, with outstanding organisation and a great atmosphere in the stadiums,” said FIFA Secretary General Fatma Samoura.

Tickets will be available for individual matches, blocks by specific venues, or blocks by specific teams. At this point, Brazil, Iran, Japan, Mexico, Belgium, Korea, and Saudi Arabia have all qualified, joining the host team from Russia.

Fans will also be required to apply for a FAN ID, an identity document issued by the Russian authorities. Both ticket and this Fan ID are required for entry to stadiums, and also grants holders visa-free entry into the Russian Federation, some inter-city travel and free use of local public transportation on match days.

For more details on the ticket process, visit the official website at Fifa.com