bruce springsteen33 Springsteen on Broadway110
A mysterious note that follows a New York Post article has sent rumors flying about the possibility of a second extension to Springsteen’s residency...

A mysterious note that follows a New York Post article has sent rumors flying about the possibility of a second extension to Springsteen’s residency at the intimate Walter Kerr Theatre.

The report, released on Tuesday, says that Springsteen “is having the time of his life”, and thus the show may extend past its current February close date, “possibly even till June”.

Springsteen on Broadway was officially announced in August with a scheduled eight week run from October 3 – November 26. By the end of the month, that run had more than doubled, with an added ten weeks that brought the close date to February 3, as it stands now. 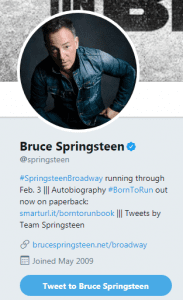 Though neither the production nor The Boss himself has confirmed this rumor, it would make sense why the show would go on. According to numbers provided by The Broadway League, Springsteen’s special event grossed $2.3 million in the first seven days alone. It made $1.9 million the second week, as well as raised over $1 million through a ticket lottery for Broadway Cares/Equity Fights AIDS.

Ticket demand does not seem to be subsiding, either, which makes sense given that the 975-seat theater is a fraction of the size of stadiums that Springsteen is used to selling out. All remaining dates are sold out on Ticketmaster, and tickets are going for a pretty penny on resale sites- a little under $1,000 if you’re willing to sit alone in the back, and at least a few thousand to sit anywhere near the front.

Reviews for Springsteen on Broadway vary; enchanted fans who attended opening night called the show “magical” and “special”, but Bruce’s home state of New Jersey ran a review that called it “a celebration of his most affluent supporters in a ritzy Broadway setting his working-man characters couldn’t begin to afford”.

Either way, the same post that teased an extension also claims that the show in a Tony nominee shoo-in.

“As for a Special Tony Award: It’s in the bag. As one Tony official says, “Do you think we’re idiots?””

Only time will tell the fate of both of these Bruce-based rumors.