Ed Sheeran104 Stuart Camp1 Ticket Leaks1 Ticket Queen1 Viagogo87
In the middle of a crackdown on Ed Sheeran tickets purchased on the secondary market for his current tour in the UK – leading...

In the middle of a crackdown on Ed Sheeran tickets purchased on the secondary market for his current tour in the UK – leading to major fan complaints – Ed Sheeran’s management has admitted to selling tickets directly at least one operator in the secondary market on past tours. The rare admission of held back tickets going direct from industry insiders to resale operators came via a response to a post on Twitter by “Ticket_Leaks,” an account which has sprung up in the wake of the anti-resale crusade by Sheeran and his management.

Ticket Leaks, which first tweeted on Sunday the 27th of May, has posted what it claims are documents showing invoices proving several industry insiders have moved tickets directly on the secondary market. One such set of documents outlined the sale of 600 tickets in 2015 to one secondary seller by Kilimanjaro Live – the tour producer for Ed Sheeran then and now. It would have been impossible to verify due to the lack of transparency in ticketing in the UK (as well as here in the U.S. and Canada, where Ontario legislators were forced to drop measures for improving that fact from the final draft of a bill when promoters threatened to simply stop staging events in the province.)

“There is no story here. Clancy was working under company instructions when he legitimately allocated tickets to Ticket Queen who we had used for several years as a primary seller. These tickets were allocated in good faith to be sold at face value in the same way we do for ticket agents at all our shows. In 2016 we learned that Ticket Queen were acting as touts & we have refused to work with them since.”

The reaction has been swift and strong against the denial. “So someone could just ring and ask for 500 tickets and you would give them to them no questions asked? No due diligence? No[t] even a cursory glimpse at their website to see if they were a secondary seller? Is that what you’re saying,” wrote one twitter user responding to the thread. Luke Massie of Vibe Tickets has also strongly come out on the subject, calling for Mark McGivern – a journalist who has published numerous anti-resale pieces – to expose the story to a larger audience.

Dave Brooks, who writes for Billboard and runs Amplify, also chimed in: 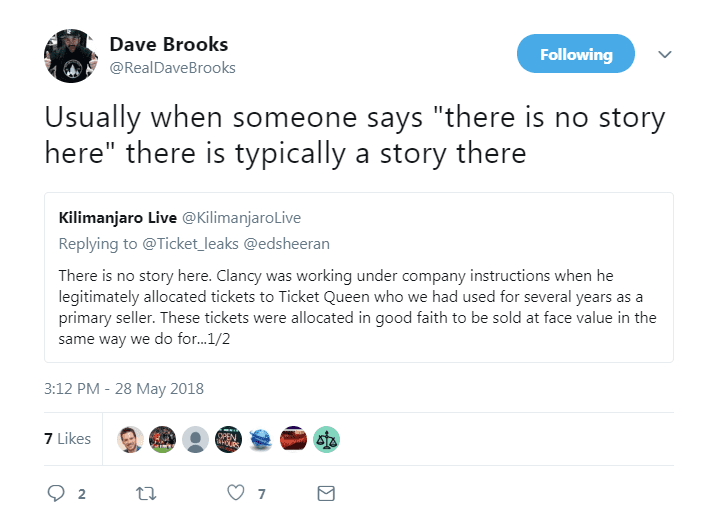 Ticket Leaks, which has opted to remain anonymous but is likely a ticket broker based in the UK (Brooks hypothesized on Twitter that it was Ticket Queen, but no details have come forth) has posted several similar documents alleging that they show direct sale from promoters to resale operators – highlighting the hypocrisy of their anti-resale stances in the media and in front of governmental inquiry on industry practices.

A Tuesday post outlined the alleged sale of 236 tickets from Ticket Factory to a resale operation – also for an Ed Sheeran show – with annotation indicating that the tickets were deliberately processed under different addresses for every four tickets (due to ticket limits on the tour). A post Wednesday allegedly documented the sale of another 150 tickets going to resale for a Queen performance, also from Ticket Factory.

Ticket Factory has reportedly declined to respond to any of the alleged documents at this point. But Sheeran’s manager Stuart Camp followed Kilimanjaro’s tweet acknowledging the documents with a statement to Billboard. “A few years ago [Maria Chenery-Woods, AKA Ticket Queen] was presented as a legit seller,” he wrote. “Found out later it was a bad practice and ceased and blacklisted [her].”

Billboard points out that the use of such an arrangement isn’t uncommon in the UK, where big stadium shows often are sold on consignment by multiple ticketing companies, with unsold seats going back to the promoter – but the direct sale from a promoter to such a company is “rare.” Camp did not respond to Billboard‘s request for additional details on the arrangement.

It’s unlikely that the exposure will amount to much, other than a brief bit of embarrassment over a common practice being made public. But it certainly highlights the ability of industry insiders to say one thing while doing another entirely while hiding behind the lack of transparency on ticket availability for the general public.