free taylor swift tickets1 Reputation Tour13 Taylor Swift60 Verified Fan59
For a while now, it’s been speculated that tickets to Taylor Swift’s Reputation tour would begin popping up at steep discounts, similar to the...

For a while now, it’s been speculated that tickets to Taylor Swift’s Reputation tour would begin popping up at steep discounts, similar to the way we’ve seen other Verified Fan flops trickle down through to Groupon, or pushed via Live Nation’s $20 all-in ticket deal going on this week. We were wrong.

They’re apparently being given out for free, for at least one tour stop.

A reader in California tipped us off to the deal, which was made available through a winery they happen to be subscribed to the mailing list for. That business, which operates a concert season of its own associated with AEG, sent an email to customers a week ago informing them of an opportunity to scoop up some free tickets to the Friday, May 11 stop at Levi’s Stadium. That performance was one of several added to the tour in early January, “due to overwhelming demand.” 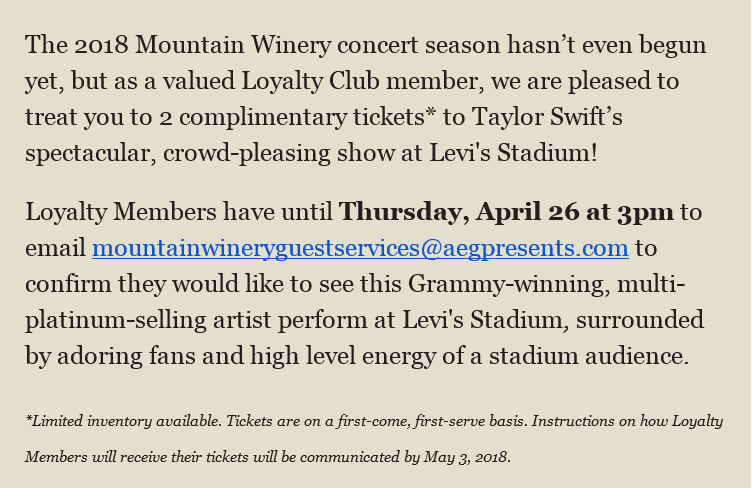 “The 2018 Mountain Winery concert season hasn’t even begun yet, but as a valued Loyalty Club member, we are pleased to treat you to 2 complimentary tickets to Taylor Swift’s spectacular, crowd-pleasing show at Levi’s Stadium!,” the email sent on Tuesday the 24th reads. All one had to do was reply to the email, and they were in.

Swift drew widespread criticism in the fall due to her leveraging of the Verified Fan system with primary ticket vendor Ticketmaster to urge fans to buy merchandise or market on her behalf to ensure their prime spot in line for the tour. The tangential benefit being, of course, that fans felt they had no choice but to purchase once they reached the sales point having already committed time and resources, despite sky-high prices for the show.

Now, with millions of revenue in pocket from the most dedicated fans, the scramble is on to avoid strutting out on stage to a half-empty stadium. Around tax time, we saw the first shot – a promotion that eliminated service fees for dates on the tour. This takes things quite a bit further.

Naturally, due to the lack of transparency in ticketing, there’s no way to know whether these tickets were held back from the start, or kicked out to the winery of late to distribute as sales have softened. AEG lists Messina Touring Group – which counts Taylor Swift as a client – as a partner on its website. We also have no way of knowing what kind of numbers were involved. Our reader got two tickets just fine, but this could have gone out to 100 people, or 10,000. A call to Mountain Winery connected us to a friendly woman who said she couldn’t say how many tickets were available to its Loyalty Club membership. But to be a Loyalty Club member, one needs only purchase tickets to events at the venue four times in a year.

What is very clear is that there’s a serious risk that there will be big gaps in the crowd, not only on May 11, but at several stops on the Reputation calendar, if things don’t pick up. As of Tuesday, a huge number of tickets remain available for the Friday night show at the home of the San Francisco 49ers through Ticketmaster.com. Prices there remain high – an after-fees “get-in” ticket in the 400s is $65. Prices on secondary marketplaces like Ticket Club for Taylor Swift performances are below $60 get-in. And it’s not just singles available in the nosebleeds – entire rows remain wide open in the floor and lower bowl for the Friday performance, where Ticketmaster has apparently opted against allowing the display of resale tickets.

Things appear better, though only incrementally so, for the Saturday performance at the same venue – which was one of the original dates on the tour. Still, large blocks of floor seats remain available, with lower bowl seats up for sale at prices not much higher than top row upper-deck seats went for during the presale. The first stop on the tour, in one week, is also full of available tickets on the primary market. The tricky thing is that the secondary market appears to be going at below the current asking price on the primary, which is well below the original face value asked for when tickets went on sale, which has been the case for much of the tour sales process.

With curtain up on the tour in a week, we wouldn’t be shocked to see more offers of the free variety headed our way. Feel free to let us know via email if you spot any more lurking in the wild.