Atlanta12 dynamic pricing15 Hamilton238
As has been the case at every location that Lin Manuel Miranda’s hip hop/history tour de force Hamilton has set up shop, the performance saw...

As has been the case at every location that Lin Manuel Miranda’s hip hop/history tour de force Hamilton has set up shop, the performance saw major demand as it went on sale in Atlanta last month. Fans hoping to score tickets were met with long delays as the system queued them up for purchase, with more than a few going home unhappy when they were informed there was nothing left.

everybody waiting for #Hamilton in Atlanta tickets this morning hates this guy pic.twitter.com/IB1dKXCqHo

Fast forward a little more than a month, and those same fans (many of whom presumably bit the bullet by this point and purchased tickets on the secondary market to ensure a chance to see the performance before it leaves town in early June are finding tickets still available from the venue – at substantially inflated prices.

“While the initial tickets available on April 8 were purchased, Broadway in Atlanta and ‘Hamilton’ producers have been transparent about plans to release additional tickets in the weeks leading up to the engagement,” a spokesman for Broadway in Atlanta told the Atlanta Journal Constitution about the sudden re-appearance of tickets. At the time of the original sale, Jamie Vosmeier – senior director of sales and marketing at the theater responded to complaints about the virtual waiting room system that it had “performed exactly as expected, with no service interruptions.”

Due to the lack of transparency about any ticket sales, it is unknown what percentage of the Fox Theatre’s 4,600 seats were available for purchase before supply reportedly ran out at 1PM the day they went on sale. What is clear is that however many were left behind are now available at an even higher premium than they were before. Originally, the tickets were at offer with a price range from $80-330, according to reporting by the AJC.  Tickets available now from the box office in the Orchestra are listed at $645 per seat plus a $39 fee. The pricing table on the venue website begins at $243.50 after fees for limited view balcony seats, more than three times the published lower fee prior to tickets going on sale.

In fact, the price bumps have made it so that tickets from the venue are more expensive than tickets on the secondary market for nearly a third of the 22 performances in Atlanta. Members on TicketClub.com can find tickets less expensive than the Hamilton Atlanta box office for three shows. StubHub has four additional performances where its prices after fees are less than the venue box office for comparable Orchestra tickets. 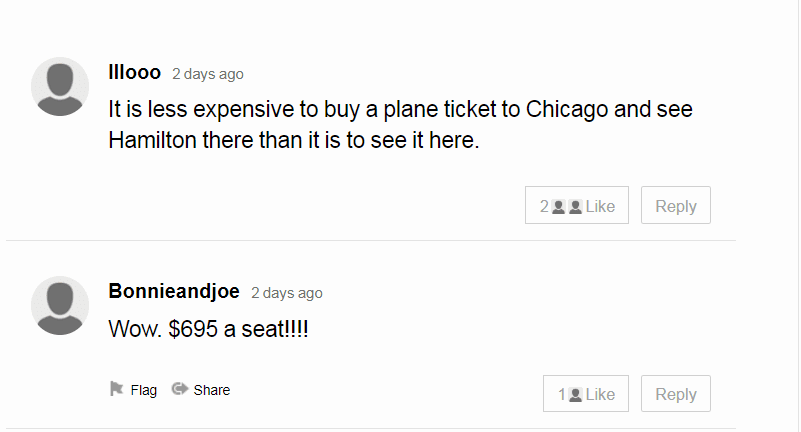 “[Some] ticket buyers have wondered why some prices have changed since the initial on-sale,” wrote the AJC. “The official word is that ‘Due to the nature of live entertainment; dates, times, performers, and prices are subject to change.”

For those in Atlanta hoping to catch the show without paying the exorbitant prices the producers themselves have pushed the market to, there is daily digital lottery for a small number of tickets to each performance for $10, similar to the popular “ham4ham” program that began in New York ($20 for two tickets – so called because Alexander Hamilton happens to be on the $20 bill).

For those who miss out on the few available at that price, checking the secondary market may be their best way to avoid being scalped.