Last Friday, the New Orleans Pelicans defeated the Golden State Warriors during Game three of their second round series in the NBA’s western conference playoffs, so their next game is scheduled to be held at Oracle Arena in Oakland on May 8. The only problem? That’s the same night Kendrick Lamar was scheduled to perform at the arena.

Months ago, organizers came up with a back-up plan, just in case something like this happened, according to the executive director of the authority which operates the venue, Scott McKibben. Since the building is needed that night for the Warriors, the hip-hop star must push his show back a day to May 9.

“That was negotiated and agreed upon months ago,” McKibben told the Bay Area News Group. “We are at the mercy of TNT and ESPN.”

This isn’t very uncommon, since conflicts occasionally occur around playoff basketball season, which revolves around TV scheduling. In 2017, a similar conflict happened; if a Game 5 was needed, the Warriors would need the arena during the same night as the scheduled Chance the Rapper concert. To his advantage, the Warriors defeated the Portland Trail Blazers, and the concert still went on as scheduled. 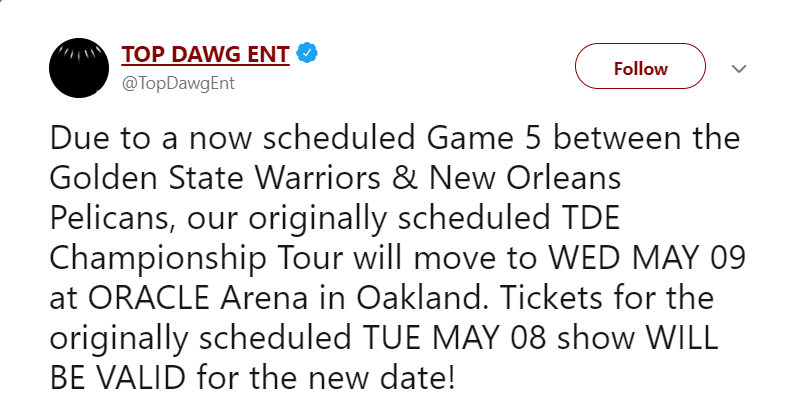 Many fans took to Twitter, upset with the last-minute postponed show, since they were not originally made aware of this possible conflict. Ticketbuyers requested refunds from Top Dawg Entertainment, however, the record label did not make a public statement about how to get refunded.

The Oakland stop is the fourth date on The Championship Tour, following shows in British Columbia and Washington. This trek will feature artists Lamar, SZA, Schoolboy Q, Jay Rock, AB-Soul, Sir, Lance Skiiiwalker, and more. After the next show, now slated as May 9, the tour will continue across the country, making stops in New York City, Atlanta, West Palm Beach, Austin, and various other big-name cities. Burgettstown, Pennsylvania will wrap-up the tour on June 16.

Lamar’s latest record, Black Panther, was just released earlier this year, which includes a feature from Lamar on the Weeknd’s “Pray For Me,” and “All the Stars” with SZA. The artist has consistently put out music throughout the past few years; since 2015, he has released one record per year. Just recently, Lamar also broke records for winning a Pulitzer Prize for Music with his album DAMN., making him the first recording artist outside of classical or jazz music to win this award.

Check out the full tour dates below for The Championship Tour, which kicked-off earlier this month.

Visit Ticket Club to find tickets to the tour through this summer. 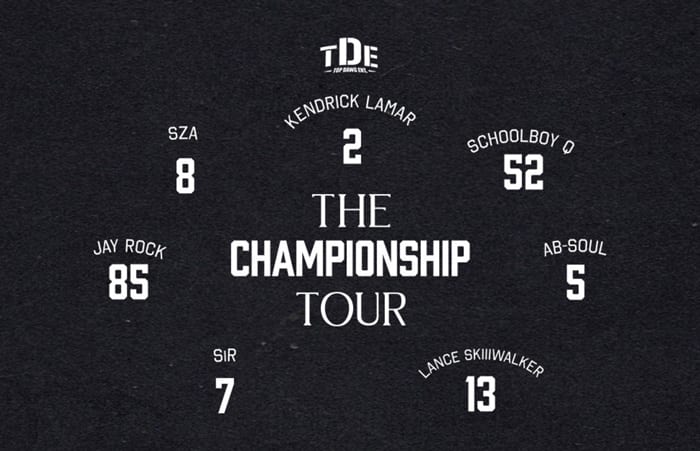