Former Smiths singer Morrissey has postponed all of his tour dates in the UK and Europe throughout July, according to his management team.

According to a statement, shows in the UK, Germany, and Sweden have been postponed due to “logistical cirumstances” beyond their control. However, the announcement came after  Morrissey’s manager Peter Katsis shut down plans to hold an anti-racism party near the singer’s concert in Manchester. The party, organized by former Hacienda nightclub DJ Dave Haslam, was set to take place on July 7 and 8.

The “One Nation Under A Groove” protest party was organized “in response to Morrissey’s divisive views and his support for the far right,” according to Haslam. In an attempt to counter the hate, Haslam wanted to throw a free party, inviting Morrissey fans to stop by before or after the concert.

“Manchester is our home,” Haslam told The Guardian. “It’s a city built on immigration, a city with an amazing legacy of great bands and wonderful clubs. Music brings people together. Strangers become brothers, sisters. All this positivity spreads into the city and beyond.”

“The Guardian Gets It Wrong Again!” Katsis wrote in a post. “Let’s get real. ‘Former Morrissey fans’ have not organized anything. That ‘Has-Been Haslam’ character was never a Morrissey fan. And his agenda, stated as using music to spread peace, could not be any further from the truth. He is simply using the situation to gain some much needed attention to himself.”

Haslam, on the other hand, said that Morrissey’s management team were “clearly rattled” by the event and noted that if these shows are rescheduled, he’d be “happy once again to provide an alternative event in the city, one that counters Morrissey’s support for Tommy Robinson and the far right.”

According to a statement from his management, Morrissey’s shows will be rescheduled “as soon as possible,” and tickets will be refunded in full. The LIHS World Tour is slated to continue this November 23 in Mexico City. According to Consequence of Sound, this announcement means Morrissey has cancelled or postponed 134 shows since 2012.

“I sympathise with fans who made plans to see him, we know what it’s like to be let down by Morrissey,” Haslam said of the announcement. The One Nation Under A Groove party will go on as planned, and Haslam welcomes Morrissey ticket holders to attend.

Check out Haslam’s post regarding the concert postponement below: 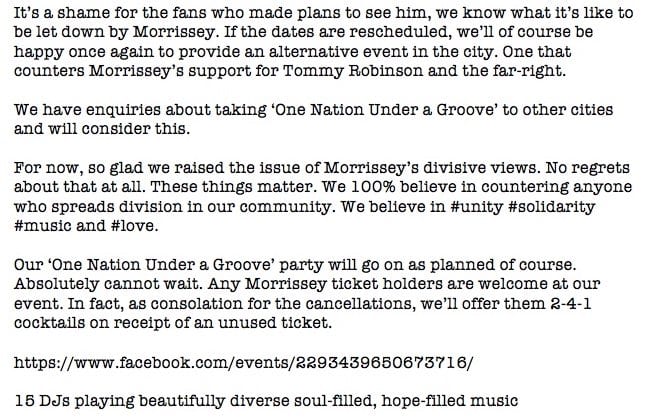