Florence and The Machine Fans Upset Over Poor Concert Organization

Thousands of fans lined up to see indie-rock band Florence and The Machine take over Botani Park in Adelaide on Wednesday, but due to poor planning at the venue, many concertgoers were unable to get the experience they paid for.

The South Australian concert offered a special front-section ticket, allowing fans to get even closer to the stage and band if they paid an extra $120 premium fee. However, concertgoers claimed that the event organizers oversold these front-section tickets, so many people who paid for the premium experience were told to go back to the regular general admission area.

According to InDaily, concertgoers said they had to wait in metres-long queues just to gain access to the front section, and when they finally reached the front of the line, concert staff turned them away, claiming that the section had reached its 2,000-person capacity. According to one ticketholder, who had paid the premium fee, staff members told her she could “line up all night,” but would not gain access to the section.

Another concertgoer said that there was no check-point between the regular general admission section and the premium front section, so fans were just flooding through.

“Because there was no checkpoint, people with the general tickets were granted access to the premium section, while other people like us who had a premium ticket and who had paid extra couldn’t get in,” the fan said. “I understand that there was a need to keep the space safe and not compromise safety but it was unfair to give the impression to the people that had bought tickets that they would be able to access that front section.”

Fans took to social media to express their frustration with the management at Botani Park: 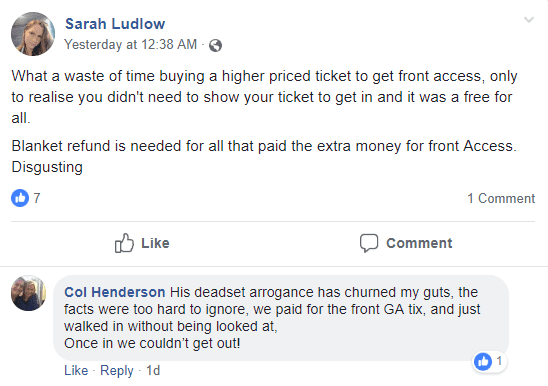 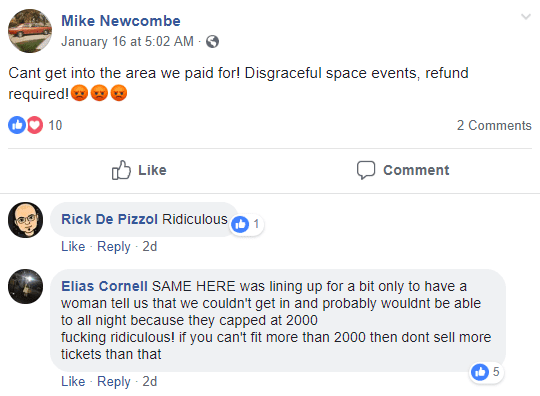 Managing Director Phil Rankine disagreed with the feedback, telling InDaily that there were adequate checkpoints at the barrier between the front and back of the general admission areas, meaning that regular general admission ticketholders would not have been able to access the premium section.

He also noted that this was the park’s first general admission concert, so they had sent out a detailed map to concertgoers ahead of the show, outlining the different ticket zones.

“When you have a lot of general admission people there can be a crush or a surge and it is up to the organisation to demarcate and create those different areas so that people can get out easily and safely,” he said.

Rankine said that the event was a “tremendous success” and no blanket refund would be provided to upset ticketholders because they “got the experience they paid for.” On the other hand, he claimed that the promoter Space Events would take their complaints seriously.

Space Events released a statement on their Facebook page, apologizing for the “confusion” caused by the additional barrier section in front of the stage, but did not issue a statement on refunds.