Green Initiative2 Solar Array1 TicketNetwork112
TicketNetwork held a special ceremony on Wednesday, as local officials and company leaders celebrated the completion of a 1.4MW solar array on the roof...

TicketNetwork held a special ceremony on Wednesday, as local officials and company leaders celebrated the completion of a 1.4MW solar array on the roof of the ticket resale marketplace’s Connecticut headquarters building. The array, which covers most of the available space on an over 200,000 square foot roof surface, is expected to produce as much as 70% of the company’s electricity needs, immediately becoming a key component in its ongoing Green Initiative.

“It is a goal of ours to be a good neighbor and environmental steward in all aspects of our operations,” TicketNetwork CEO Don Vaccaro told Patch.com. “This project is a big step in our continuing goal to minimize our consumption and be a role model within our community and beyond.”

Installed by EnterSolar, the system generates enough electricity to cover the usage equivalent to 160 houses, annually. It offsets the generation of an estimated of 1.52 million pounds of CO2 each year, comparable to the impact of planting some 18,000 seedlings.

“Today is a special day because the efforts of the Connecticut government and legislators have resulted in businesses taking positive steps to protect the environment, at the same time reducing their carbon footprint,” said state Sen. Saud Anwar, a former mayor of South Windsor who now represents the district where the company’s HQ resides. “Today, TicketNetwork has shown reducing its carbon footprint and using solar energy will help it not only save money but the environment.” 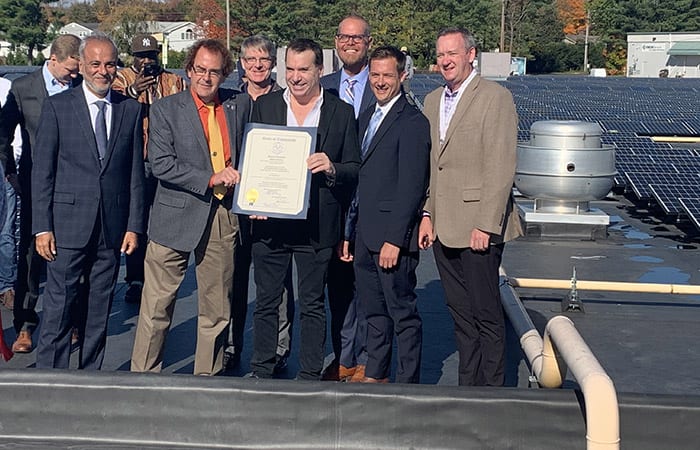 TicketNetwork CFO Chris Hummer opened the brief ceremony, speaking to assembled media and dignitaries on the company commitment to the environment, which includes the operation of an animal sanctuary on its HQ grounds, a vegetable garden and orchard providing food for employees and the company cafeteria, and a tree farm in Connecticut in addition to the solar roof.

EnterSolar project manager Rob Miller also spoke, discussing the significance of the solar array – believed to be one of the largest of its kind in central Connecticut. He touched on the difficulties in a project of that scope being installed on a building built in the 1950s, and its demonstration of the company commitment to being a good environmental steward and neighbor. With 4,365 solar panels, the system is expected to pay for itself in approximately 3.5 years.

According to real-time statistics available on TicketNetwork’s website via EnterSolar, the solar array has generated nearly 900,000 kWh since its completion in May of this year.