“Born & Raised Music Festival came to life with an idea to celebrate Outlaw, Texas, and Red Dirt country music,” festival producer Mike DuCharme said in a statement provided to Rolling Stone. “These genres are showing a resurgence right now on the music scene. People want to celebrate their roots and listen to music that reminds them where they were born and raised.”

For its headliners, the Born & Raised Festival falls on their already-heavy performance schedules. Nelson, now 86, remains a consistent touring act. He is currently headlining U.S. shows non-stop through April. Meanwhile, Williams Jr. has a batch of springtime dates lined up as well as a supporting role to Chris Stapleton‘s Truist Park show in July.

Tickets for the Oklahoma festival are available in three price tiers: General admission ($89.50), Reserved seating ($159.50) and VIP ($469.60). Attendees can also purchase camping packages to take in all the scenery.

See the full Born & Raised Festival lineup in the official poster below. 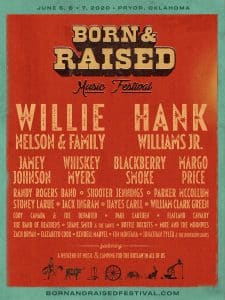