Green Day and The Lumineers have signed on to be the headlining performers at the first Florida edition of Innings Festival. A baseball-themed festival, Innings has been run for several years in Arizona, but 2022 will be the first time the event is run in the other Major League Baseball spring training locale on the Gulf of Mexico.

Green Day is atop the bill on the first night of Innings Festival Florida, scheduled for March 19 and 20, 2022 at Raymond James Stadium and its grounds in Tampa. The Lumineers headline night two. Other acts on Saturday include Incubus, 311, Jimmy Eat World, and Highly Suspect. Sunday support comes from Khruangbin, Nathaniel Rateliff and the Night Sweats, GOod Goo Dolls, and OAR, among others.

The previously announced 2022 Arizona edition of the festival takes place in February and is headlined by Foo Fighters and Tame Impala.

Taking place during the Grapefruit League spring training, Innings Festival Florida is billing itself as “the ultimate east coast spring training celebration,” and features a total of fifteen artists on three stages, with no overlapping sets. 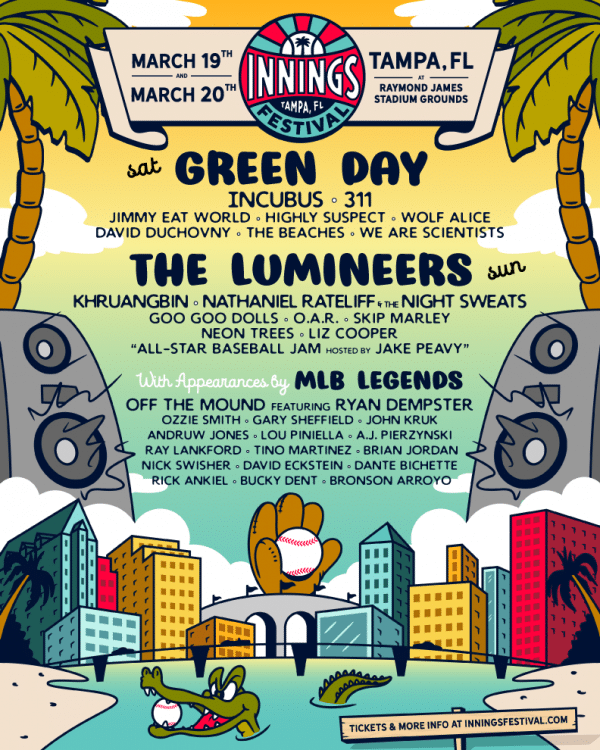 In keeping with the baseball theme, a number of MLB greats will also be appearing at the event, including Ozzie Smith, Gary Sheffield, John Kruk, Lou Piniella, A.J. Pierzynski and more along with a live taping of “Off the Mound with Ryan Dempster,” an on-site talk show featuring MLB players and musicians.

Tickets for the event are on sale beginning Friday, November 5. Options include 1-and 2-day general admission, GA+, VIP and Platinum price points. Children 7 and under are free to attend with a ticketed adult.