Editor’s Note: For those looking for the Penn State article, it is here – apologies for the incorrect link in the email: Penn State Cancels Ticket Accounts Leveraging Mobile-Only Ticketing Data

The ticket market for Super Bowl LVI continues to see prices fall as the game approaches, with the “get-in” number falling by as much as 30 percent just this week, according to TicketNews tracking of several high-profile ticket marketplaces. As of Thursday, Super Bowl LVI ticket prices start at as low as $3,800 when all fees are included, while the upper end of single ticket prices stands at around $67,000. Full suites are also available, with prices ranging well over $100,000 but covering a large number of tickets.

Opinions on the slumping Super Bowl LVI ticket prices tend to focus on softer than expected demand from Los Angeles Rams fans, despite the fact that the team is playing in its home stadium. Traditionally, there is an expectation that prices fall in the two weeks before any Super Bowl, but stabilize and even climb again in the final few days before kickoff, but the trend has been consistently downward since the matchup was set.

Though prices have certainly fallen – median prices are down by an average of 40 percent across the eight tracked marketplaces – they are still very high compared to historical averages. Tickets to see the Los Angeles Rams and Cincinnati Bengals on February 13 at SoFi Stadium are likely to be close to all-time price highs, even with the downward trend. 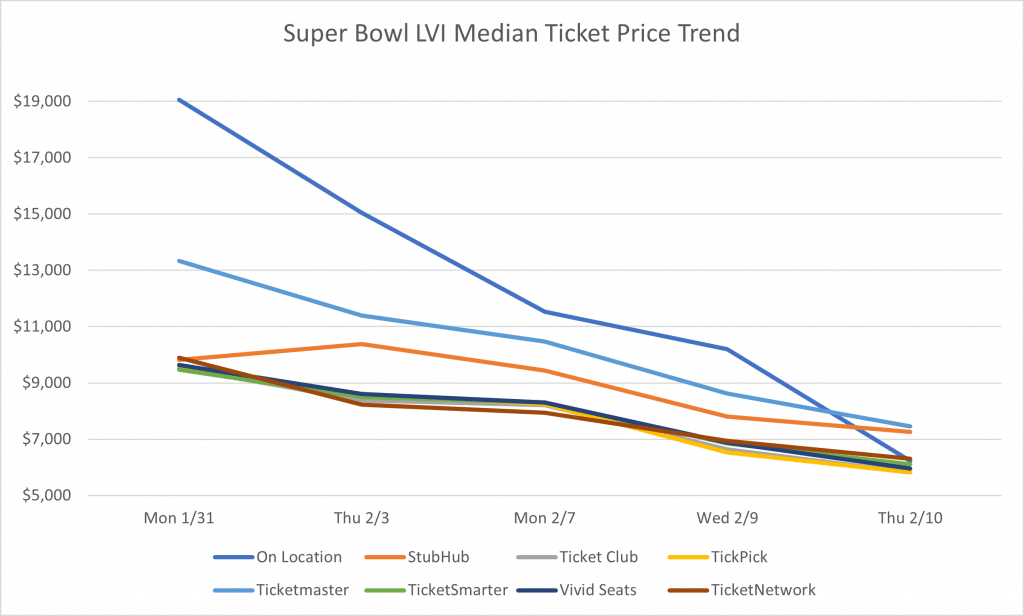 Note: percent change is from Monday January 31 to Thursday, February 10

WHO HAS THE LOWEST SUPER BOWL LVI TICKET PRICES?

The minimum price you can pay for the Super Bowl LVI ticket right now is hovering at around $3,800, fees included. At TickPick, $3,767 gets you a seat in Section 511, on the upper sideline behind the Bengals bench. Members of Ticket Club, who are also shown the all-in price with no service fees (free membership for TicketNews readers here) can grab a pair in Section 543 on the opposite side of the stadium for $3,856. Vivid Seats and TicketNetwork also have a get-in Super Bowl ticket price at under $4K after fees, compared to prices nearly universally being over $6K after fees on January 31.

Note: percent change is from Monday January 31 to Thursday, February 10

WHO HAS THE BEST SUPER BOWL LVI TICKET DEAL?

The best Super Bowl LVI ticket deal is a hard one to answer at this point, as it’s completely subjective. It’s also hard to conjure up a lot of enthusiasm for any ticket “deal” that involves spending thousands of dollars, but that’s the nature of the Super Bowl ticket market these days.

TicketNetwork has the best known “deal” that we’re aware of at this time, offering a Super Bowl LVI ticket coupon code good for 20 percent off any ticket on its system, before fees, maxing out at $3,000. That code is TNPRSBLVI and can be entered at checkout.

Interestingly, three of the four NFL-anointed ticket resale platforms are at the opposite end of the spectrum, deal-wise. On Location Experiences, Ticketmaster, and StubHub have consistently been at the top of the table for prices. StubHub currently has the highest get-in price at $4,391, while  Ticketmaster – the preferred ticketing platform for much of the National Football League’s buildings including SoFi Stadium – has taken over that top spot  for median prices at $7,457. It also has the highest non-suite ticket price currently available, at $66,687. On Location Experiences, which is largely controlled by the league’s owners themselves, had been the highest median ticket price available until being eclipsed by Ticketmaster at some point between Wednesday and Thursday of this week.

When it comes to the high-end of the Super Bowl LVI ticket prices, there’s no end to what you can spend if you’re comfortable with it. SoFi Stadium is one of the newest venues in the world, and it was built with the high-end market in mind, meaning lots of suite-level and VIP tickets are out there. Those prices have also fallen substantially in the last 11 days, but in many instances, we’re talking about the tickets costing the equivalent of one reasonably well-equipped 2022 Honda Accord vs. a pair of them.

Once again Ticket Club and TickPick seem to lead the way, with the all-in pricing model. Both have seen their maximum single-ticket price listings drop by 50 percent since January 31, as have TicketNetwork and TicketSmarter. A front row seat in Lower VIP 131 can be had for $32,400 at Ticket Club and  $32,056 at TickPick. One listing on Ticket Club can grab two tickets six rows back for $16,496.

If a sideline for two isn’t quite enough, there are also suites available through many of the marketplaces, which can accommodate as many as 24 people at a rate of around $10-12,000 per person.

WHEN SHOULD YOU BUY SUPER BOWL LVI TICKETS?

Again, an entirely subjective question. It does seem like the asking price remains on a downward trend, but that can change quickly, particularly as inventory begins to get lower as Sunday’s kickoff approaches. As you can see on the graph below, the trend lines have only accelerated downward this week, but waiting too long could result in missing the turning point and paying more than you would by locking them in. 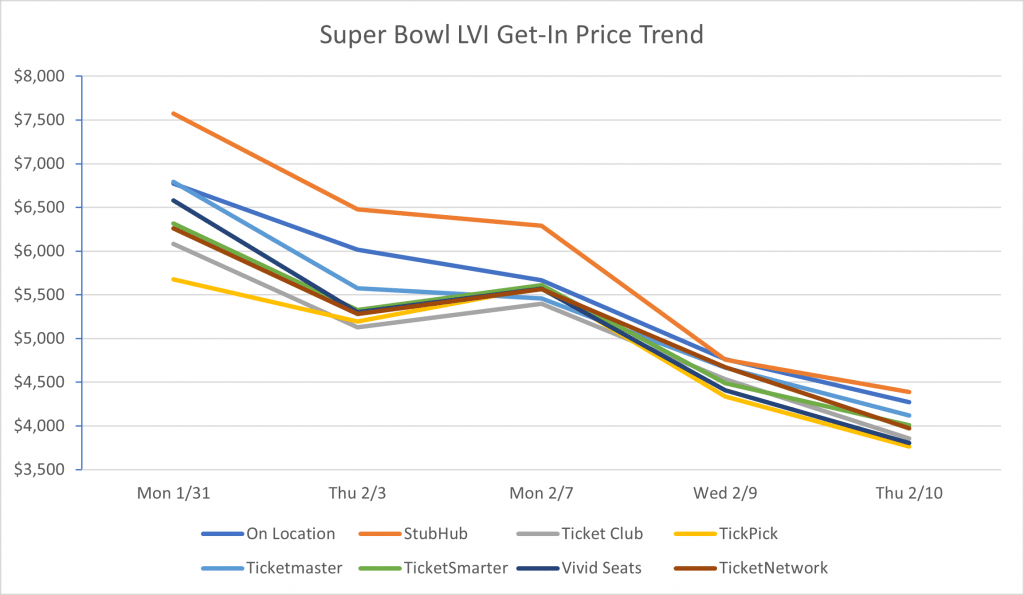