A recently released national poll showed that consumers in the United States strongly support better protection of their rights related to tickets they’ve purchased. They believe that once they have purchased tickets, they own them – and shouldn’t be restricted from using them as they see fit without any input or restriction from the event organizer or ticket vendor.

According to protect Ticket Rights, which commissioned the survey, respondents came out overwhelmingly in favor of rules that would limit what organizers or vendors can do to limit consumer choice after tickets are purchased. Poll results include:

The survey queried a representative national sample of 800 individuals across the U.S. between October 13-19, 2021. It was conducted using Google Surveys. Its findings were broadly similar to a survey recently taken in Florida.

In its release of the poll results, Protect Ticket Rights points out that these answers indicate consumers sentiment is in line with the proposed Better Oversight of Secondary Sales and Accountability in Concert Ticketing Act (the “BOSS” Act). This legislation, which has been a passion project of Rep. Bill Pascrell (D-NJ) for more than a decade, was last introduced in 2019 with Rep. Frank Pallone (D-NJ), Rep. Albio Sires (D-NJ) and Sen. Richard Blumenthal (D-CT) co-sponsoring the legislation. Its supporters argue that it would address current flaws in the live event ticketing ecosystem by guaranteeing the right to transfer tickets, improving transparency regarding ticket availability and pricing, and strengthening competition among ticket sellers.

“The BOSS Act as previously crafted contains common sense, pro-consumer rules that are needed in the live event ticketing system. Consumers overwhelmingly support and desire the protections and reforms that were included in the legislation previously introduced,” said Gary Adler, Executive Director and Counsel of the NATB, which sponsors the Protect Ticket Rights initiative. “Comprehensive reform will require each player in the ticketing industry to compromise, adapt, and be held more accountable. A law like the BOSS Act will improve the overall experience for fans so that they can buy tickets in a more vibrant and trustworthy marketplace. Not only do Americans support their basic rights as ticketholders, but they also overwhelmingly want real legal protections – that’s where the BOSS Act comes in,” Adler continued.

A factsheet released by Protect Ticket Rights along with the survey findings is included below: 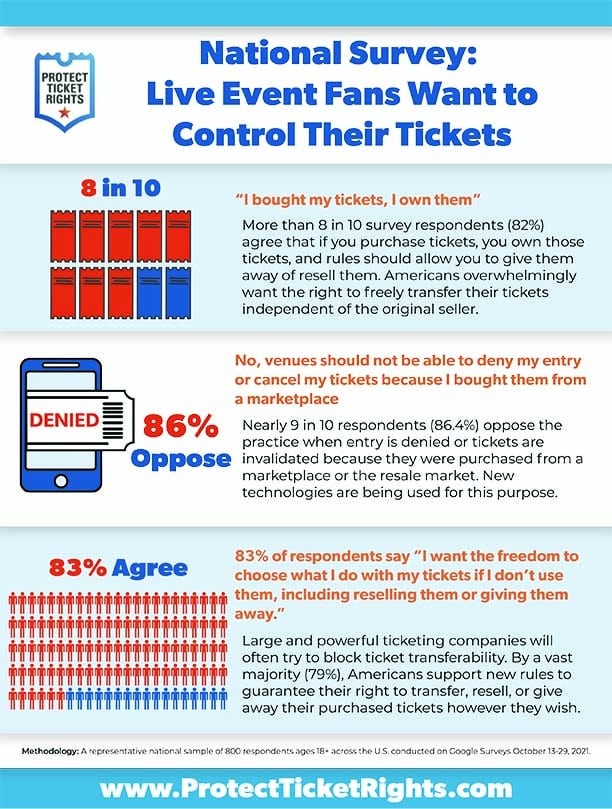