A national system outage caused major issues for college football fans and ticketing offices over the weekend, impacting hundreds of thousands of consumers. The outage meant fans couldn’t access tickets in the mobile-only ecosystem, and the schools on the system with home games – some of the highest profile across college athletics – were stuck in the lurch until the problem was fixed.

According to reports, issues began popping up late morning on Saturday, just as kickoff times were approaching for the full slate of games. Issues included problems accessing tickets through the mobile-only ticketing systems, as well as transferring tickets from one account to another. 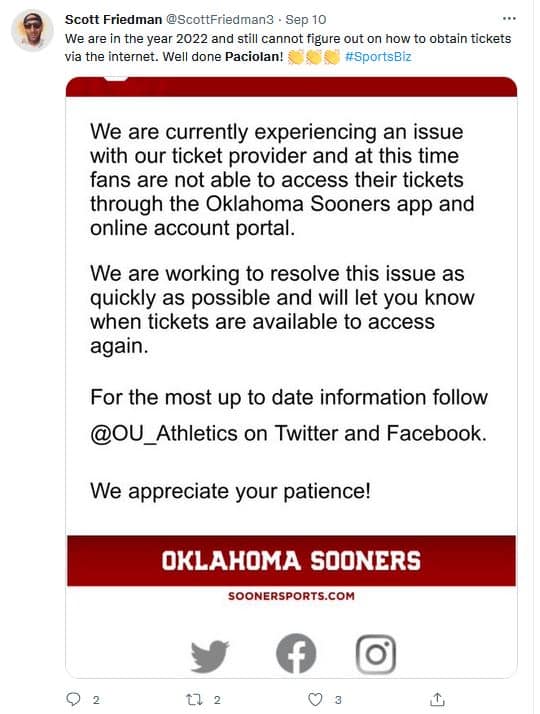 The issues led to significant delays at stadium entries, with many fans likely locked out entirely from purchasing tickets at the last minute as well. According to the Associated Press, many schools sent emails to fans who had purchased tickets, to allow them to show those to stadium employees who allowed them to enter the games as they were already underway.

“I was clean-shaven when we got in line, so it’s been a minute,” joked one fan waiting to enter a game on Saturday. Eventually, the box office printed out paper tickets, allowing those waiting for the mobile-only system to come back to life a chance to get in before the game was too far gone. “Old school, take it back to Jonny Majors at Pitt, Old School paper tickets,” the fan said.

Paciolan is a dominant force in the ticketing world for college athletics, making the timing of their outage particularly troublesome. According to its website, it is the largest primary ticketing company in the college space, with 125 clients, including 75 percent of the so-called Power Five schools.

System outages like the one that struck Saturday have been the bane of mobile systems, ranging from lines snarled across the country caused by a central Ticketmaster issue that crippled the entry for several events to an instance where Kid Rock fans had to wait in a long line to print tickets at the venue when the mobile entry option failed. Consumer advocates have also pushed back against mobile-only ticketing systems for accessibility reasons, given the lower access to smartphone devices faced by low income and elderly consumers.

While some fans took it in stride, many others were not so pleased with the massive outage and the havoc it caused, taking to social media to vent their frustrations.

You are looking live @PaciolanTix newest ticketing technology for colleges across America. I hope heads rolled this morning. It is disgraceful what you put hundreds of thousands of people through yesterday. #paciolan pic.twitter.com/dEddTiy1te

Reports indicate that the issues were largely resolved by the middle of the afternoon, meaning that the majority of gametime issues were isolated to early contests – though consumers needing to purchase or transfer tickets for later games experienced plenty of headaches as well.

Paciolan has not made any official comment regarding the outage as of Monday afternoon.