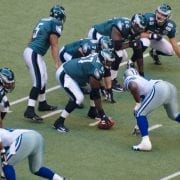 As the countdown to Super Bowl LII continues, football fans fuel sales for the remaining games of the post-season. Sunday’s NFC Championship showdown between the Eagles and Vikings in Philly claimed the No. 1 spot, with the AFC decider between New England and Jacksonville following closely at No. 3.... END_OF_DOCUMENT_TOKEN_TO_BE_REPLACED