AC/DC1 Beyonce36 Drake & Future1 Hamilton238 Kanye West1 MArc Anthony11 The Bad Boy Family Reunion1 The Lion King32
September 7, 2016 By Tammy Whaley EVENTS — AC/DC is Back in Black, back on tour and back onto the rankings With just a... 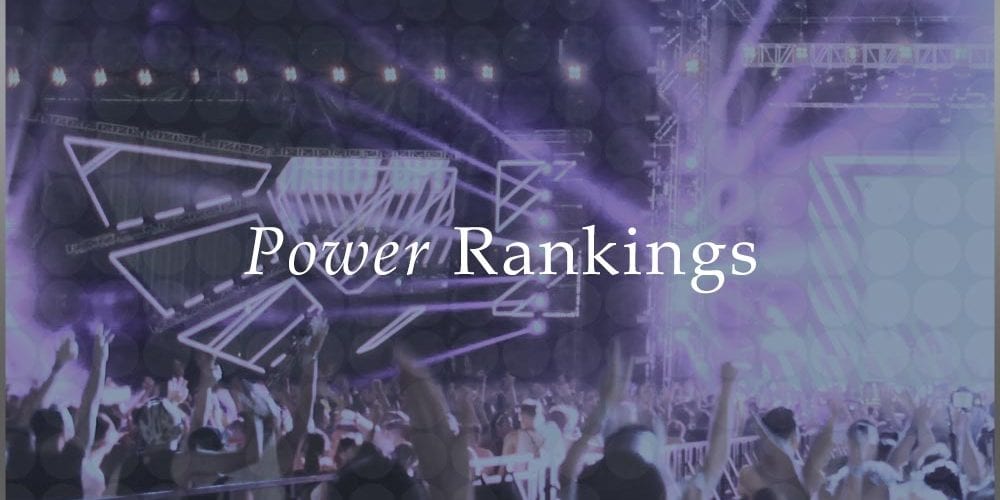 EVENTS — AC/DC is Back in Black, back on tour and back onto the rankings 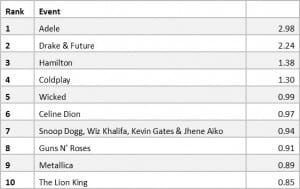 With just a few more stops left in their ‘Rock or Bust’ tour, the legendary rock band made their way onto the TicketNews® exclusive rankings chart this week into the No. 8 position. Even with the departure of beloved singer, Brian Johnson, who is suffering from accelerated hearing loss, the band continues to sell out shows with replacement front man, Guns N’ Roses, lead singer Axel Rose.

Remaining shows for the band include stops at the Palace in Detroit, First Niagara Center in Buffalo, The Verizon Center in Washington D.C. and finally wrapping up the tour at the Wells Fargo Center in Philadelphia.

Latin singer, Marc Anthony also made his way onto the rankings this week in the No. 7 spot. With a recently announced 15 date tour, titled Marc Anthony Live, the singer will make his way to the stage on September 17 in Las Vegas, and will wrap up the mini tour on December 9 in San Juan.

Many of the other artists on the charts stayed the same, just changed their rankings positions.

Ever present Broadway favorites, Hamilton, The Lion King and Wicked all remained in the top rankings in the No. 2, 6 and 9 positions, respectively.

Controversial hip-hop artist Kanye West, whose currently in the middle of his Saint Pablo tour, rounded out the charts this week in the No. 10 position.

VENUES — American Airlines Arena flies onto the rankings this week 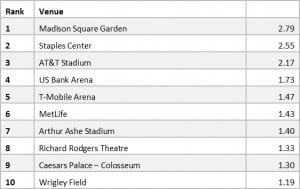 Miami’s own American Airlines Arena landed in the No. 6 spot this week with some help from a variety of events taking place over the next few months. This past week the sports and entertainment arena saw tickets go on sale for Latin singer, Marc Anthony, whose bringing his ‘Marc Anthony Live’ tour the arena for two dates in November. Additionally with the upcoming NBA season quickly approaching Miami Heat fans surely helped propel the venue onto the charts.

Other upcoming event being held at the arena include: The Bad Boy Family Reunion, Kanye West, Disney on Ice – Follow Your Heart, Adele, Mana and the iHeart Radio Fiesta Latina.

Also new to the rankings this week, and rounding out the rankings in the No. 10 position is Houston’s own NRG Stadium. With the NFL season opening this week, Houston Texans helped drive their beloved team’s home stadium onto the rankings along with a number of other upcoming events including the always popular Houston Livestock Show and Rodeo.

Additionally new on the rankings this week are the T-Mobile Arena in Las Vegas and Los Angeles’ Staples Center. The T-Mobile arena landed the No. 7 spot with some help from upcoming performances by George Straight & Kasey Musgraves, Drake & Future, the IHeart Radio Music Festival, The Rolling Stones, Keith Urban, Five Finger Death Punch and Kanye West. The Staples Center grabbed the No. 9 spot with performances including: Drake & Future, Mavis Staples & The Family Stone, Carrie Underwood and Kellogg’s Tour of Gymnastics Champions.

With the US Open coming to an end on September 11 where the men’s final and women’s doubles final will be played, The Arthur Ashe Stadium in Flushing, N.Y. made a respectable jump from last week’s No. 5 into the No. 2 position.

New York’s own Madison Square Garden moved up into the coveted No. 1 spot, from last week’s No. 2, with upcoming performances from legendary rock group AC/DC and Adele, while the Richard Rodgers Theater, home to Broadway favorite Hamilton, moved into the No. 3 position from last week’s No. 7.

Along with the Texans, this week other NFL stadiums which made onto the rankings include: home to the Dallas Cowboys, AT&T Stadium, New York’s own Jets and Giants, MetLife Stadium, and the Green Packers Lambeau Field coming into the No. 4, 5 and 8 positions respectively.