Baseball takes over the rankings while Roger Water lands in the No. 1 position 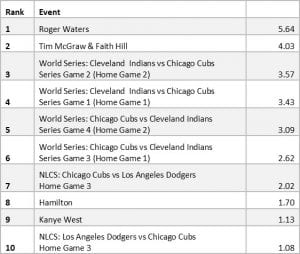 With the announcement of the ‘Us + Them’ tour, fans of the legendary Pink Floyd artist, Roger Waters helped the singer snag the No. 1 position in the charts this week. Rogers said the tour will be a mixture of music from his years with Pink Floyd as well as some new music. According to Waters’ site, the tour will immerse fans in a state-of-the art audio & visual sensory experience.

With the Major League Baseball season coming to a close, and the Cleveland Indians and the Chicago Cubs vying for the coveted World Series Championship title, the rankings saw six ranked positions go to baseball games this week. The No. 3, 4, 5 & 6 positions went to World Series game tickets, while the No. 10 spot went to the NLCS home game 3 between the Los Angeles Dodgers vs the Chicago Cubs.

Husband and wife country duo, Tim McGraw and Faith Hill saw their Soul2Soul tour, move from the No. 1 position last week down the to the No. 2 spot, while rapper Kayne West moved in the top 10, taking the No. 9 spot. Ever present Broadway favorite, Hamilton moved down the No.8 spot down from last week’s No. 6. 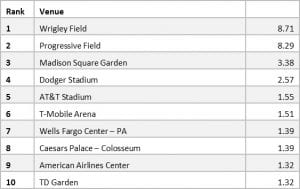 After weeks of dominating the venue rankings in the No. 1 position, Madison Square Garden finally was knocked out of the coveted spot by World Series contenders’ Chicago Cub’s home stadium, Wrigley Field. With the World Series just kicking off the No. 2 top ranked venue also went to a World Series competitor, the Cleveland Indians home stadium, Progressive Field. Both stadiums saw huge power scores in the rankings this week with Wrigley Field coming in with an 8.71 and Progressive Field at 8.29.

Although they were knocked out of the running for the World Series by the Chicago Cubs last week, the Los Angeles Dodgers saw their Dodgers Stadium secure the No. 4 position this week.

New to the rankings this week is the TD Garden which rounded out the rankings in the No. 10 position. Upcoming events being at the multi-purpose arena include: Boston Celtics and Boston Bruins home games, WWE: Hell in a Cell, Pentatonix, Comics Come Home, Kellogg’s Tour of Gymnastics Championships, Stevie Nicks & the Pretenders, iHeartRadio Jingle Ball: Ariana Grande, Shawn Mendes & Diplo, Andrea Bocelli, Kanye West and Kings of Leon.

Also new to the listings this week is the American Airlines Center. This Dallas venue, home to the Dallas Mavericks and Stars managed to land in the No. 9 position. Upcoming events being held at the multipurpose arena include: Mavericks home games, Stevie Nicks and the Pretenders, Elite Athletes Championship, Pentatonix, Kanye West, iHeartRadio Jingle: Meghan Trainor, the Chainsmokers & Fifth Harmony and Maxwell & Mary J. Blige.

The rest of the top rankings remained the same, except for the listings changing ranked positions and fluctuating in power scores. With the Dallas Cowboys doing well this football season the AT&T Stadium made a jump in the rankings this week landing in the No. 5 up last week’s No. 10 spot, while T-Mobile Arena, in Las Vegas made a jump in the rankings to the No. 6 position from last week’s No. 8 position. Caesars Palace – Colosseum made it onto the rankings in the No. 8 spot.