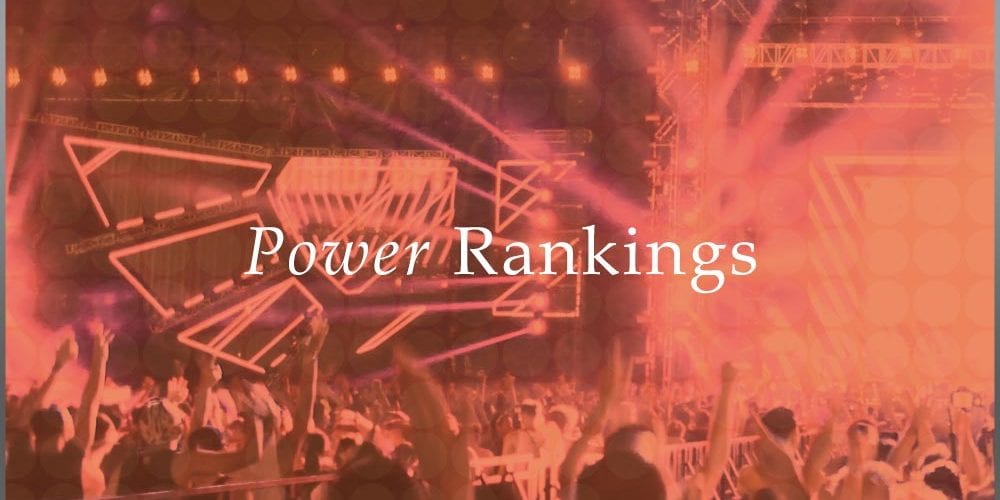 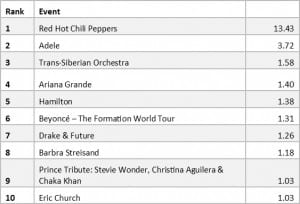 Making an impressive debut onto TicketNews’ exclusive event rankings this week is the Grammy award-winning rock band, Red hot Chili Peppers (RHCP) who landed in the No. 1 position with a very comfortable power score of 13.43.

The group recently released a new album, ‘The Getaway’ to coincide with their 2017 North American Tour also named after its new music. Pre-sale tickets were available for most dates on September 22 & 23 with most general on sales being available September 23 & 24.

The tour kicks off January 5 in San Antonio at the AT&T Center and wraps on March 18 in Vancouver BC at the Rogers Arena. Other tour stops for the band include: New Orleans, Memphis, Tulsa, Wichita, St. Louis, Lincoln, Minneapolis, Detroit, Toronto, Boston, Philadelphia, New York, Denver, Glendale, San Diego, Los Angeles, Oakland, Portland, and Seattle.The group recently released a new album, ‘The Getaway’ to coincide with their 2017 North American Tour also named after its new music. Pre-sale tickets were available for most dates on September 22 & 23 with most general on sales being available September 23 & 24.

Another new event added to the rankings this week is pop diva, Ariana Grande, whose second leg of her Dangerous Woman tour recently went on sale in support of her album of the same name, released in 2016. The tour kicks off in Phoenix on February 2 and wraps on April 15 in Orlando. Other cities the singer will be making at stop in include: Las Vegas, Uncasville, Buffalo, New York, Cleveland, Washington, Philadelphia, Boston, Toronto, Detroit, Chicago, Kansas City, Seattle, Sacramento, Los Angeles, Houston and Atlanta.

Also new to this week’s rankings is the star-studded Prince Tribute being held October 13 at the Xcel Energy Arena in St. Paul, Minneapolis. The event will feature members of the Prince family, including Morris Day and the Time, Shelia E, The Revolution and the New Power Generation. Other performers will include: Stevie Wonder, Christina Aguilera & Chaka Khan.

The rest of rankings remained stable with Adele grabbing the No. 2 spot, up from last week’s No. 3 spot, The Trans-Siberian Orchestra grabbing the No. 3 position down from last weeks, No. 2, and Broadway favorite, Hamilton, moved up in the No. 5 spot from last week’s No. 6. Drake & Future grabbed the No. 7 spot while Beyoncé moved up one spot to the No. 6. Iconic Barbra Streisand landed the No. 8 spot while Erich Church rounded out the rankings in the No. 10 position.

VENUES — The Xcel Energy Center surges onto the venue rankings 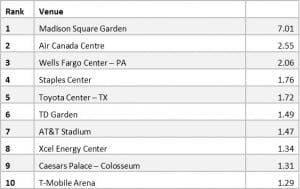 Prince fans help the Xcel Energy Center land onto the rankings this week in the No. 8 position. The multi-purpose arena, located in St. Paul, Minnesota, will host the late singer’s tribute concert on October 13 and will feature a star-studded line up including: Morris Day and the Time, Shelia E, The Revolution and the New Power Generation, Stevie Wonder, Christina Aguilera & Chaka Khan.

Other upcoming events being held at the arena include: Minnesota Wild games, Def Leppard, Kanye West, Carrie Underwood and Pentatonix & Us the Duo.

Also new the venue rankings this week is the Toyota Center in Houston. With NBA preseason just around the corner, the Houston Rockets home arena, has upcoming games starting October 4, which help land the arena in the No. 5 position.

Other upcoming events being held at the arena include: Mana, Mac Anthony, Stevie Nicks and the Pretenders, Sia, Adele and Black Sabbath.

Another venue new the rankings this week is the TD Garden in Boston. The Garden, home to Bruins and Celtics, who both have upcoming seasons landed in the No. 6 spot.

Other upcoming events being held at the arena include: Amy Schumer, Blake Shelton, R. Kelly, Ringling Bros. and Barnum and Bailey Circus, and Sia, Miguel & Alunageorge.