Top Concert Events447
New tour appearances in the rankings this week March 1st by Tammy Whaley Several new tours made it into the top 10 TicketNews exclusive...

New tour appearances in the rankings this week 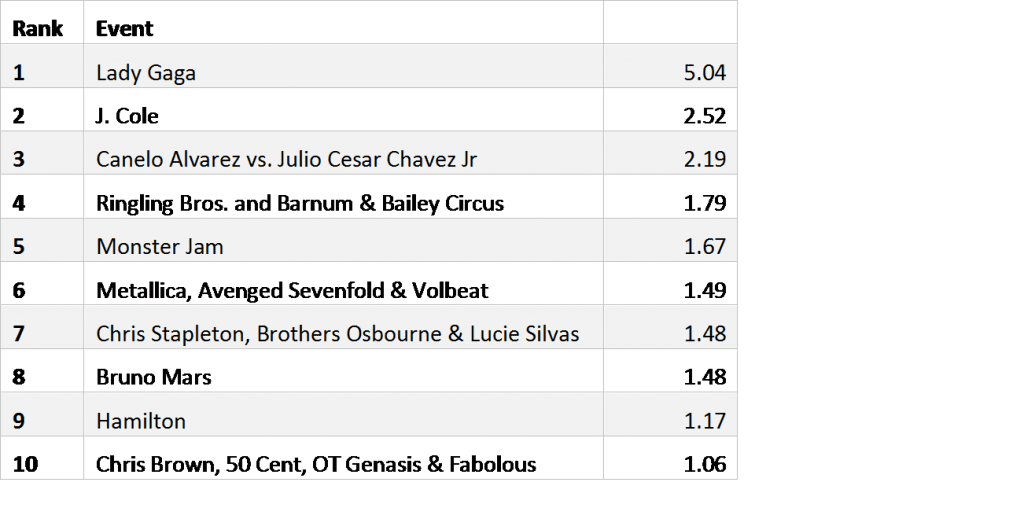 Several new tours made it into the top 10 TicketNews exclusive event rankings this week including hip-hop artist J.Cole, who managed to grab the No. 2 position with his ‘4 Your Eyez Only’ World Tour. The tour is in support of his new album of the same name, which was released that past December. Tickets went on sale for this event February 21 and sold out with minutes for most of his tour dates.

Another new event in this rankings this week is the Canelo Alvarez vs Julio Cesar Chavez Jr fight. The match-up, which is being billed as the biggest all-Mexican fight in boxing history landed in the No. 3 spot. The highly-anticipated bout will take place on May 6 at the T-Mobile Arena in Las Vegas.

The Chris Stapleton, Brothers Osbourne & Lucie Silvas tour is another new event featured in the rankings this week and landed in the No. 7 position. Stapleton said he would be announcing a new yet-to be-named album on May 5th in support of the ‘All-American Road Show Tour,’ which will kick-off on March 9 In Houston and will wrap on August 25th in Gilford.

Lady Gaga managed to stay in the No. 1 position again for the 2rd week straight with her Joanne tour, while the Monster Truck Jam tour also retained its same rank from last week in the No. 5 position. The Metallica tour dates featuring Avenged Sevenfold and Volbeat moved into the No. 6 position down from last week’s No. 1 while Bruno Mars stayed in the No. 8 spot. Theatre favorite Hamilton, crept back into the top 10 and grabbed the No. 9 spot. 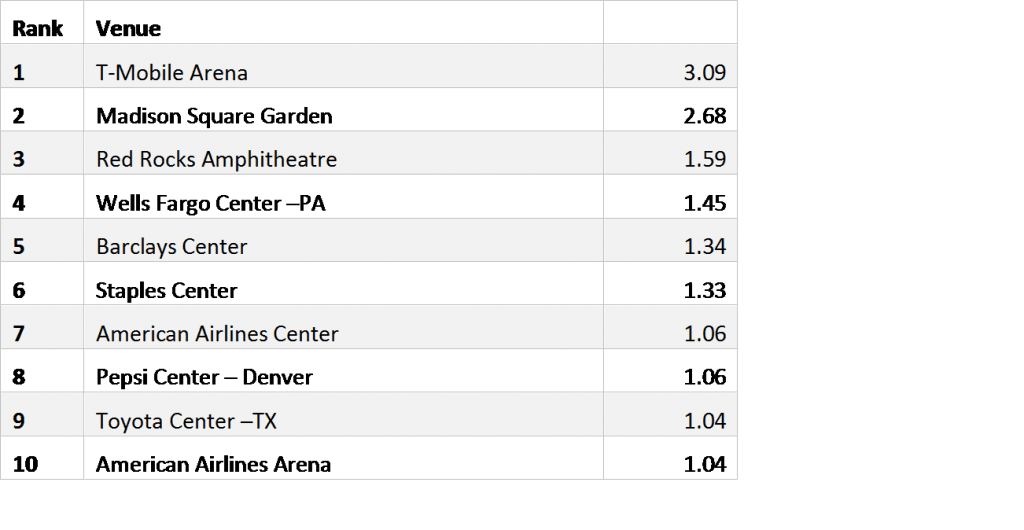 With some high profile event taking place at the The Pepsi Center in Denver over the next few months the venue managed to land in the top 10 venue rankings this week in the No. 8 position. The multi-purpose arena is home to the NBA’s Denver Nuggets and NHL’s Colorado Avalanche.

Much of the rankings remained stable except for the T-Mobile Arena which made a substantial jump in the rankings due to the upcoming highly-anticipated fight between Canelo Alvarez vs Julio Cesar Chavez Jr, which is being held at the arena on May 6.