Mayweather-McGregor Fight Not Selling as Well as Hoped?

Conor McGregor51 floyd mayweather23 Ticketmaster847
A quick scan of the headlines this week shows a predictable narrative: tickets to the August 26th “superfight” between Floyd Mayweather, Jr. and Conor...

A quick scan of the headlines this week shows a predictable narrative: tickets to the August 26th “superfight” between Floyd Mayweather, Jr. and Conor McGregor were snapped up super fast, and are now available at ridiculous prices in the secondary market.

While the latter is true, the former is far from it, at least as of Friday afternoon.

On sale Monday at 1 p.m. Eastern (10 a.m. Pacific), the highly-anticipated and much-hyped bout between the unbeaten fight legend coming out of retirement and upstart MMA braggart who’s never boxed as a pro was available only through Ticketmaster’s Verified Fan program. Inexpensive tickets – at least, if you can call the $500 price tag upper level offering that – never showed up in my searches (I registered for the presale, mostly to see if I could even get one if I tried). 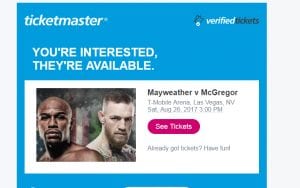 This hit my mailbox on Friday morning.

But, throughout the day, tickets to the pricier areas were coming up when I searched. I even received an email later in the day from Ticketmaster reminding me that tickets were available. On Tuesday, only “verified resale” tickets at predictably inflated prices showed up on Ticketmaster, but today, after receiving another email from Ticketmaster letting me know that if “You’re Interested, They’re Available,” there are both resale and regular sale tickets still up for sale.

There’s no real problem with this – clearly the event was priced to soak up as much money from primary sales as it could given promoters are on the hook to each fighter for over $100 million. But the headlines talking about an instant sellout and harping about the absolute highest of the high-end prices on the secondary market are a bit misleading.

Today on TicketClub.com, the highest price ticket for Mayweather-McGregor is on the floor, Section E, Row D. I’m not certain if the row scheme at T-Mobile starts with AA or anything like that, so Row E is either four back from ringside, or somewhere further, but still pretty quality for a fight night. Those are on offer for $65,663 each, for a total of $131,326 for the pair. Since TicketClub operates on a membership basis instead of making its profit on last-checkout-step fees – that’s the full price to see the fight, not counting all the other Vegas costs you might incur.

Long story short – don’t believe the hype. Mayweather-McGregor tickets are absolutely going for a mint, but are not sold out, and focusing on the top-tier of what people are asking for on the secondary market is a fallacy – because the price doesn’t matter until somebody’s willing to pay it.