Mobile App11 Paperless2 Ticketmaster800 ticketmaster12 Ticketmaster Presence1
A new paperless ticketing system is on the way from Ticketmaster, which unveiled the app-based “Presence” experience for the media this week. According to...

A new paperless ticketing system is on the way from Ticketmaster, which unveiled the app-based “Presence” experience for the media this week.

According to numerous media reports, the system works by using individual mobile phones to broadcast ticket data to receivers at the entry point. So instead of having a ticket-taker scan your paper with a barcode or QR code or swipe your credit card, an inaudible (to humans, at least) tone would be your passport. Ticketmaster representatives claim it would save time on the entry process – avoiding debacles like the recent B.C. Place U2 concert.

The app would also presumably be an avenue for promoters and venues to interact more fully with those attending shows. Justin Burleigh, EVP of product for Ticketmaster North America, said in a statement: With Presence’s digital technology, “venues and content owners can now connect directly to someone attending an event to foster personalized fan engagement, simplify the ticket management experience, protect against fraud, and enhance security.”

How much data the app would harvest from users, or how those who would prefer not to tie their smartphone to their concert experience for any number of other reasons, remains to be seen. 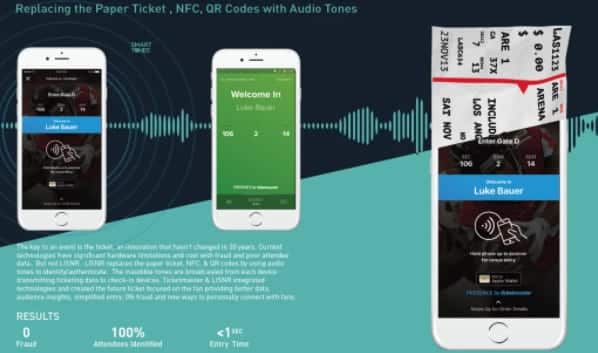