Jason Aldean47 Route 91 Harvest Festival10
Jason Aldean was on stage at the Route 91 harvest Music Festival on the Las Vegas strip when a man opened fire on the...

Jason Aldean was on stage at the Route 91 harvest Music Festival on the Las Vegas strip when a man opened fire on the crowd, killing at least 50 and injuring over 200, according to the latest reporting.

Over 22,000 country music fans were in attendance at the festival, which took place near the Mandalay Bay casino. Reports indicate that the suspect broke a window out at the Mandalay Bay and began firing on the crowd shortly after 10 p.m. local time. A witness quoted by ABC News described the situation as “nonstop gunfire” while concertgoers attempted to scramble to safety despite having no idea of where the shooting was coming from.

The shooter was located on the 32nd floor of the hotel and casino. After several minutes of chaos, police were able to locate and enter the room, where they found the shooter dead of what is being reported as a self-inflicted gunshot wound. Reports indicate he was found with over ten rifles in the room. With 50 dead thus far, the incident has become the deadliest mass shooting in United States history. Forty nine were killed in June of 2016 when a gunman opened fire at the Pulse nightclub in Orlando, Florida.

Concertgoer Mike Cronk told ABC News that as Aldean was playing, it “kind of sounded like some fireworks going off. I think there was the first kind of volley, and then all of the sudden second volley. My buddy’s like, ‘I just got hit, you know.’ He got hit three times. Then people started diving for the ground. And it just continued.

“It was pretty much chaotic,” Cronk continued. “Lots of people got hit. … It took a while to get him out. We had to get him over the fence and hiding under the stage for a while, you know, to be safe. And, finally, we had to move him because he had three chest wounds.”

Aldean responded to the shooting on Sunday night on Instagram, saying “Tonight has been beyond horrific. I still don’t know what to say but wanted to let everyone know that Me and my Crew are safe. My Thoughts and prayers go out to everyone involved tonight. It hurts my heart that this would happen to anyone who was just coming out to enjoy what should have been a fun night.” 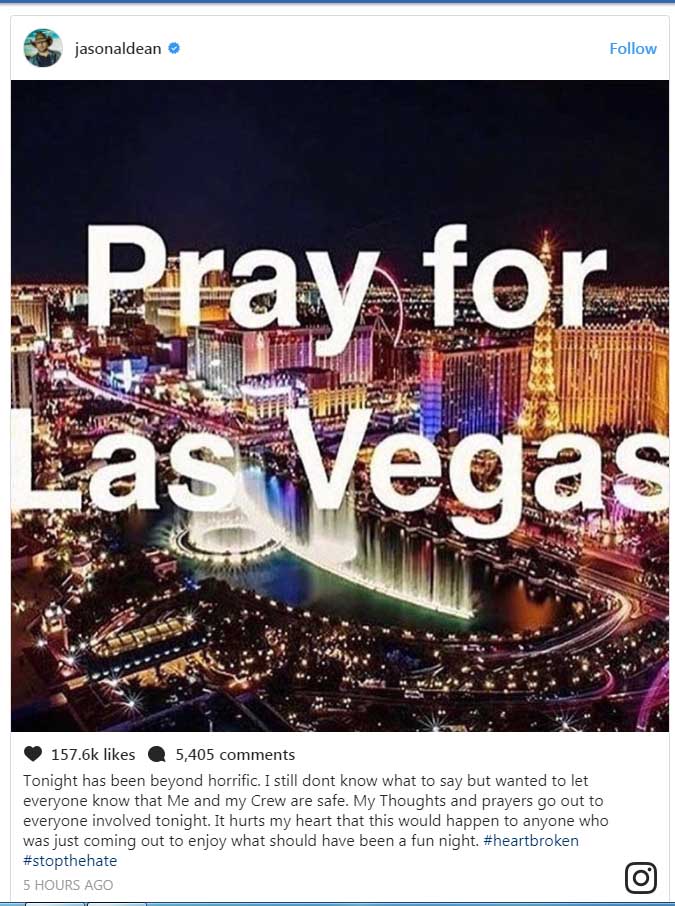 This is the second live music event marred by an event of mass violence this year alone, following the May 2017 suicide bombing that killed 23 (including the bomber) at an Ariana Grande concert in Manchester, UK. IThat incident was determined to be an radical Islamic terrorist attack. In this instance, the man identified as the assailant is an elderly white man who lived in the Las Vegas area and has not had prior run-ins with law enforcement. It is unclear at this time what his motivations for the terrorist attack are.