Could a quick transgression, occurring in 140 characters or less, cost the Indianapolis Colts big? Perhaps, according to a report by Mike Florio on Pro Football Talk, which outlines the potential that season ticket holders could sue the team’s owner for fraud over an January proclamation that quarterback Andrew Luck’s shoulder surgery was successful and that he’d be ready to go for the upcoming year.

The tweet in question from Jim Irsay occured on January 19th: 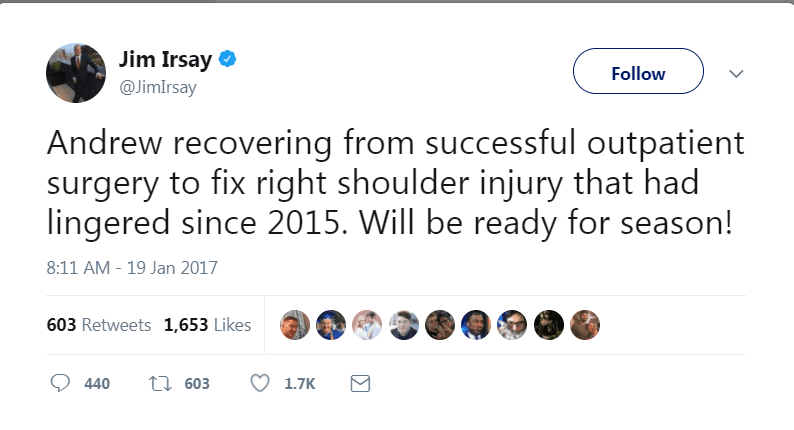 For those curious, Colts QB Andrew Luck is on Injured Reserve and will not take a single snap in 2017. That’s where the proverbial wicket gets a bit sticky – was Irsay, who as the team’s owner, could theoretically (and in reality, most likely did) have fairly comprehensive information regarding the actual health status of his quarterback, deliberately mislead fans?

At the time of the tweet in question, season ticket sales for 2017 were in full swing. Bad news about the star QB’s surgery could have closed more than a few wallets, one might assume. But where does optimism become fraud? And did Irsay cross that line with his messaging?

The PFT article goes into fairly exhaustive details regarding how Irsay’s access to medical information about his quarterback could prove damning if a lawsuit is brought. In light of a text message allegedly sent by Luck and seen by a member of the media, such actions may be likely.

The text in question, according to a source, saw Luck admitting “I’m nowhere near ready. They’re putting me out there to sell tickets.”

In a recent interview with a local radio station, GM Chris Ballard tried to throw water on that alleged text, saying “Anybody that knows Andrew and has received texts from Andrew knows that most of the time they are two characters or three characters long,” Ballard said. “‘Yes’ or ‘no’. He still has a flip phone, which aren’t the easiest things to text with. So for anybody to say that Andrew made that text or made that remark, I would say that’s a fabrication on their part.”