All I Want for Christmas is You tour3 Cancellations22 Mariah Carey24

Mariah Carey announced last night via Twitter that she is forced to cancel the first several shows of her “All I Want for Christmas is You” concert series due to “a lovely upper respiratory infection.”

“You know there is nothing I love more than celebrating the holidays with my festive Christmas show,” Mariah says, “but I have to take my Doctor’s orders and rest until he says I can sing on stage.” 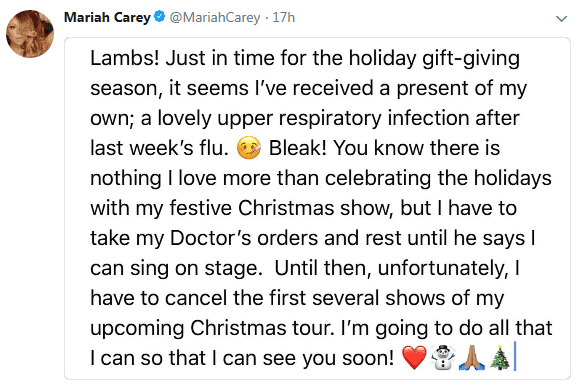 Carey, 47, reports that she contracted an infection after suffering the flu last week. The illness caused her to miss out on the premiere of new animated nativity film “The Star”, which features a track by her of the same name.

The tour was set to kick off this Friday in Ontario, but will now begin Nov 27 in New York City.