Shakira announced yesterday on Instagram that she is forced to postpone the European leg of her El Dorado World Tour to 2018 due to a hemorrhage on her right vocal cord.

The Colombian singer, 40, announced over the weekend that she would be postponing the first five dates in France and Germany in hopes that some rest would lead to a quick recovery. Now, she tells her fans “with a heavy heart” that she will need several more weeks to recover.

In a long letter posted both in Spanish and English for her worldwide fan base, Shakira says that, “in the home stretch of [her] rehearsals, [she] felt a strange hoarseness that impeded [her] singing” and that “in all the years [she’s] been singing, [she’s] never been faced with a situation like this.”

Shakira calls El Dorado “the best show of [her] artistic career” and thanks her tour team, her kids, and her fans for their dedication and understanding.

“I hope overcome this difficult trial and to return to the stage as soon as possible, to once again hear your voices singing along with mine”.

Postponed dates include cities in France, Spain, Portugal, Germany, Italy, Switzerland, and Luxembourg. Tour promoters Live Nation have yet to provide further information about rescheduled dates, but Shakira says she will return to the postponed cities in 2018.

The full statement from Shakira is below: 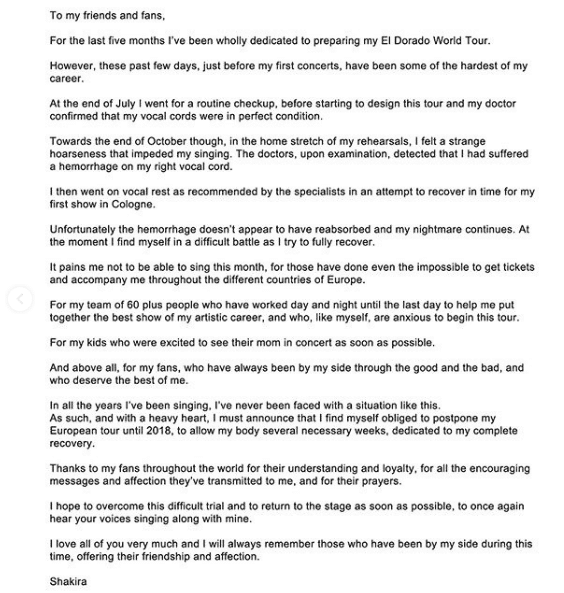