Secondary Markets14 Ticket Brokers10 Ticket Resale94 Ticketmaster817
by Silence Dogood, Special to Ticket News Do as I say. Don’t do as I do. If you were paying attention, there was a recent...

If you were paying attention, there was a recent legislative round table in Albany, New York regarding ticket resale. In the room were representatives from several venues around the state, a few people on the resale side of things and of course, Ticketmaster.

Ticketmaster and their “fan friendly” stance.  The usual mantras to the effect of “these brokers are ripping off customers” rose to the top.  Speculative tickets, requiring resellers to disclose face value on every ticket… and of course removing the requirement that a primary provider offer customers a ticket in a transferrable form that does not involve them… quite “fan friendly”.

I guess in a world of fake news and where irony is dead, the notion of granting a legislative monopoly as “fan friendly” seems par for the course.  But those that know the basics of economics know that forcing transactions to one and only one channel for any product leads to lack of competition and higher prices. Other factors that lead to higher prices are imperfect information and inability of sellers in freely enter and exit a marketplace.

Ticketmaster was very much in favor of requiring resale sites to properly disclose fees up front for resellers.  They made clear that rules of original ticket sellers vs resellers are not the same. They felt that resellers should be required to show the total price.  The irony is that they don’t do this themselves.  Look below at some screenshots from their site: 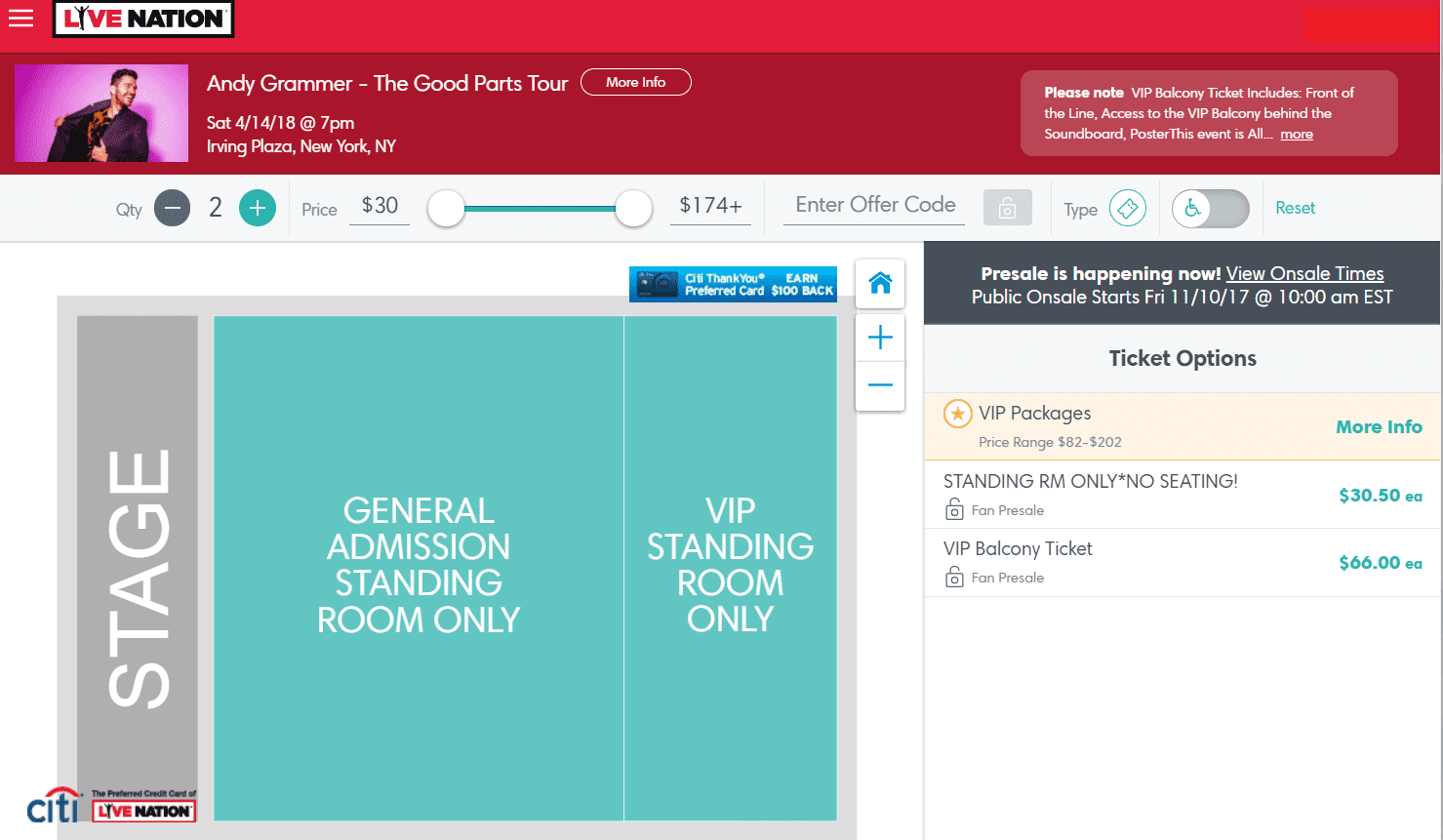 You select these $30.50 tickets and there they are in your cart… mysteriously they are now $43.  Without explanation the price has jumped 41%. 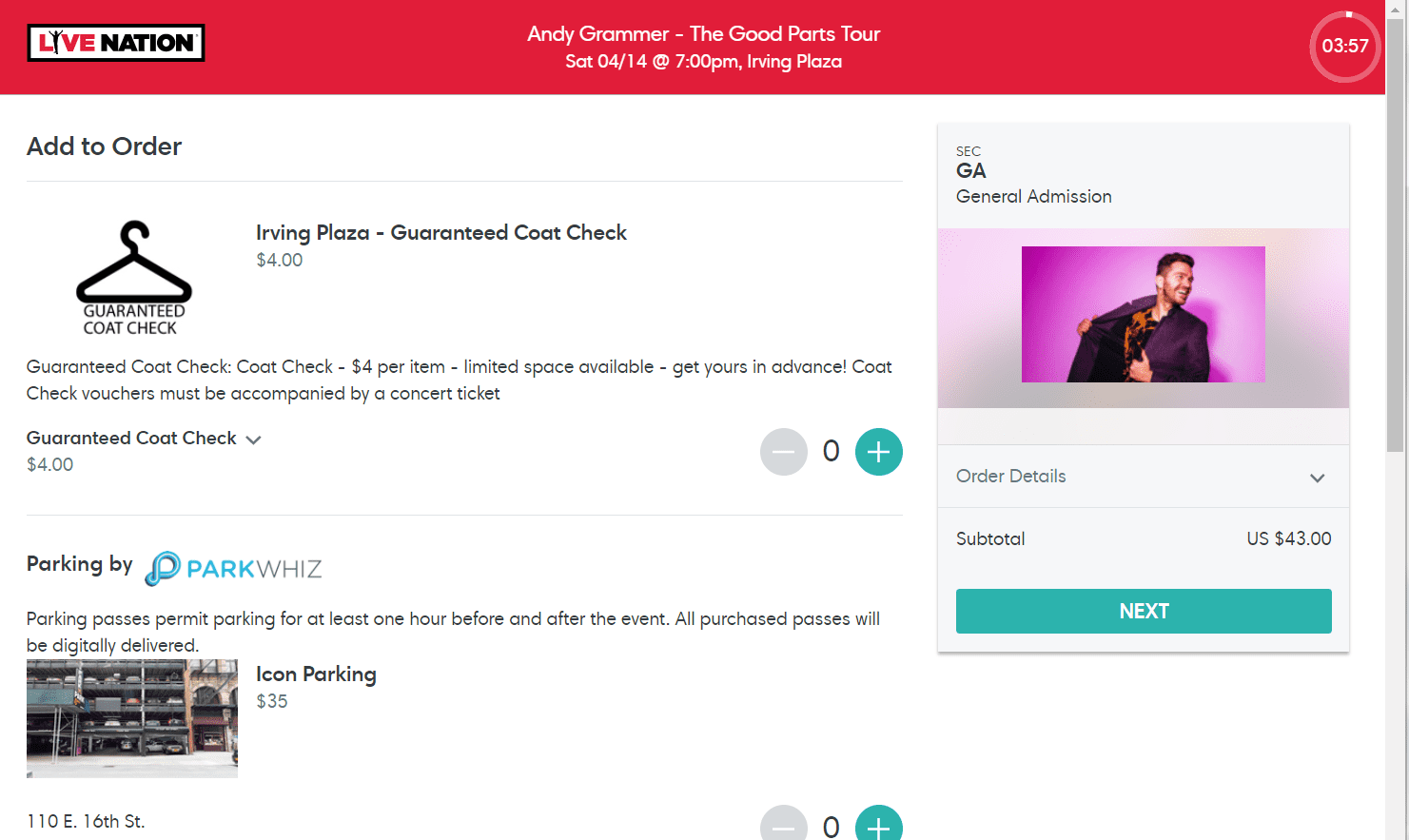 Then you see your shipping options and the ticket(s) again: 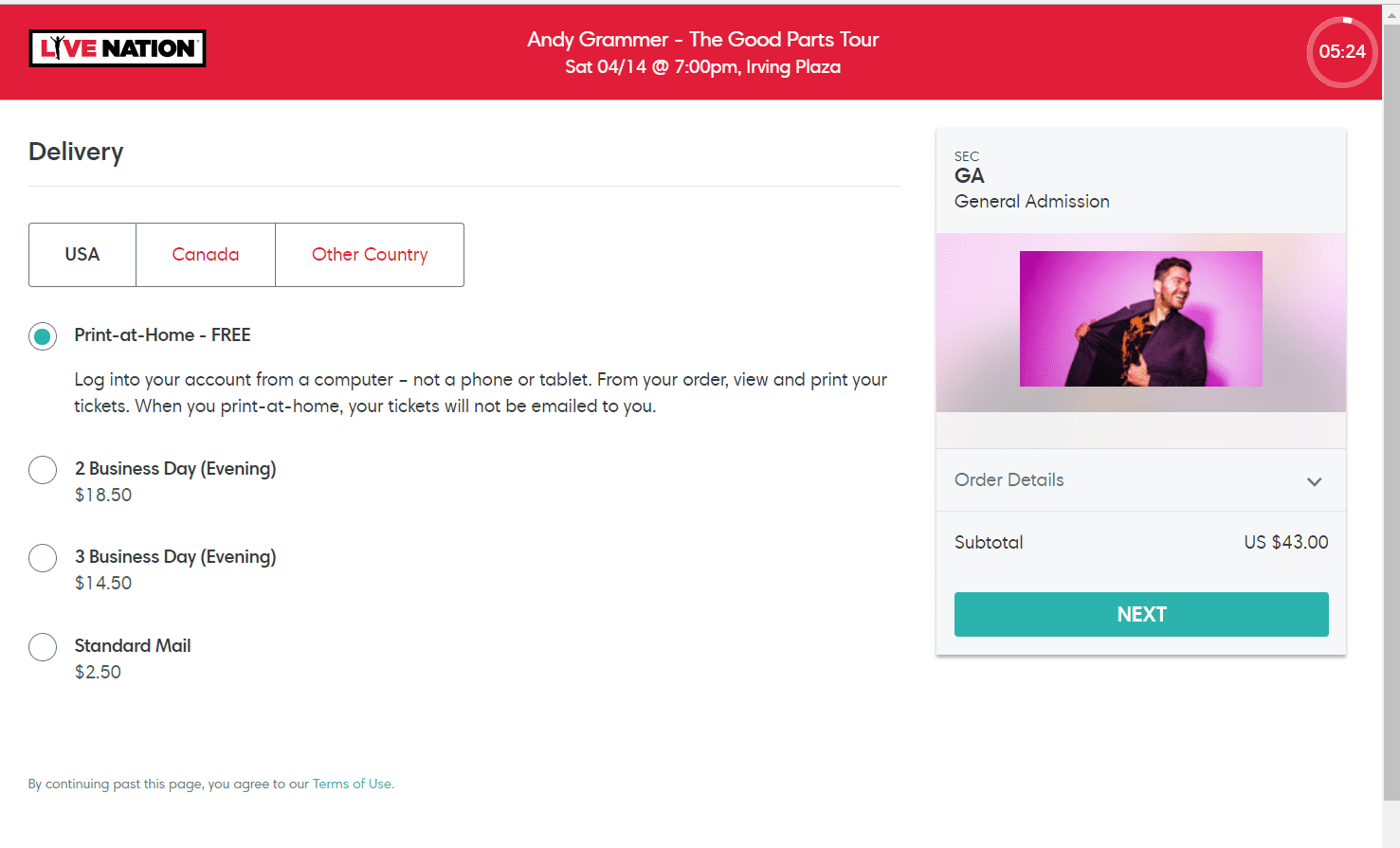 Then you see your payment options and can finally checkout: 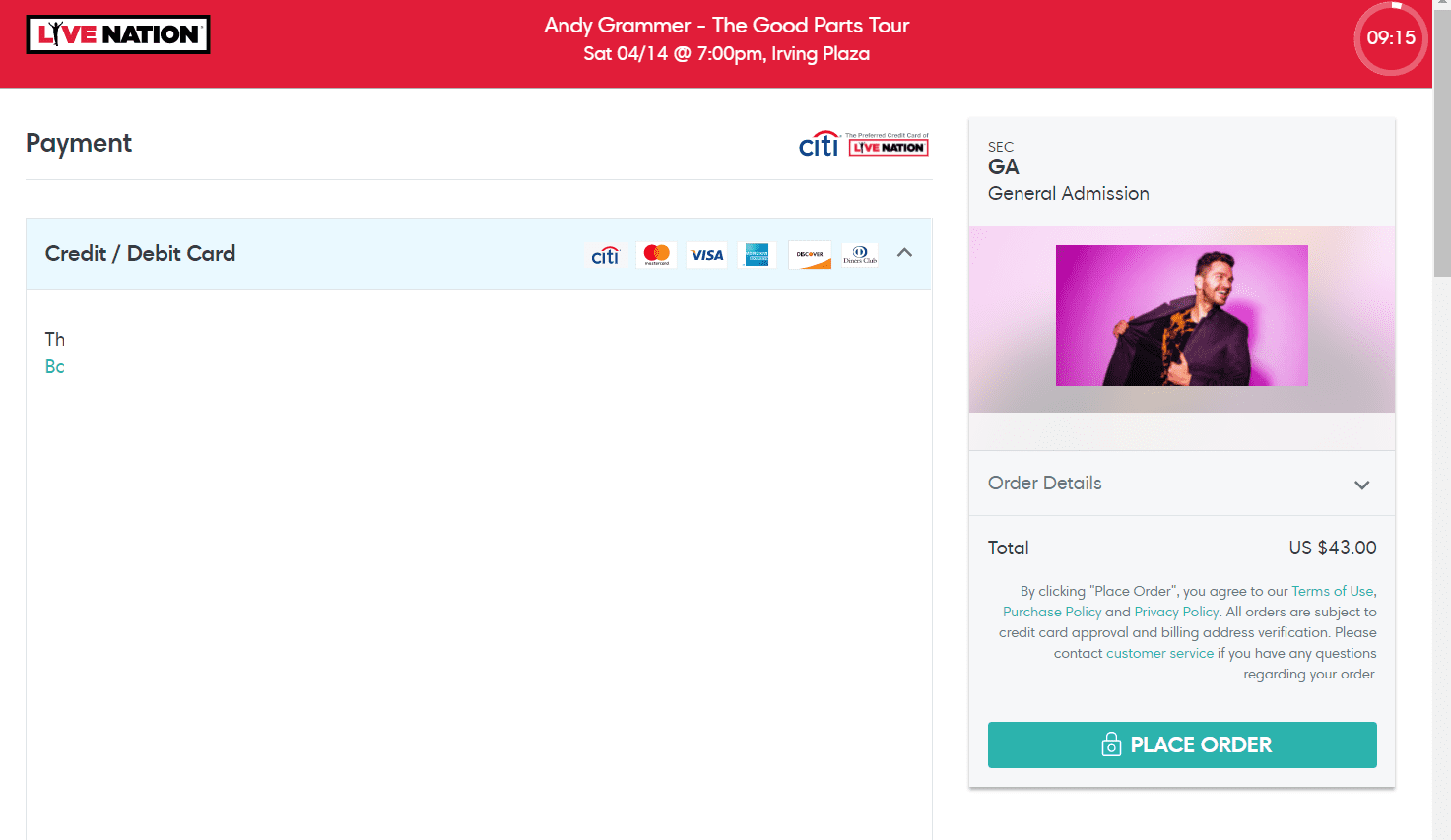 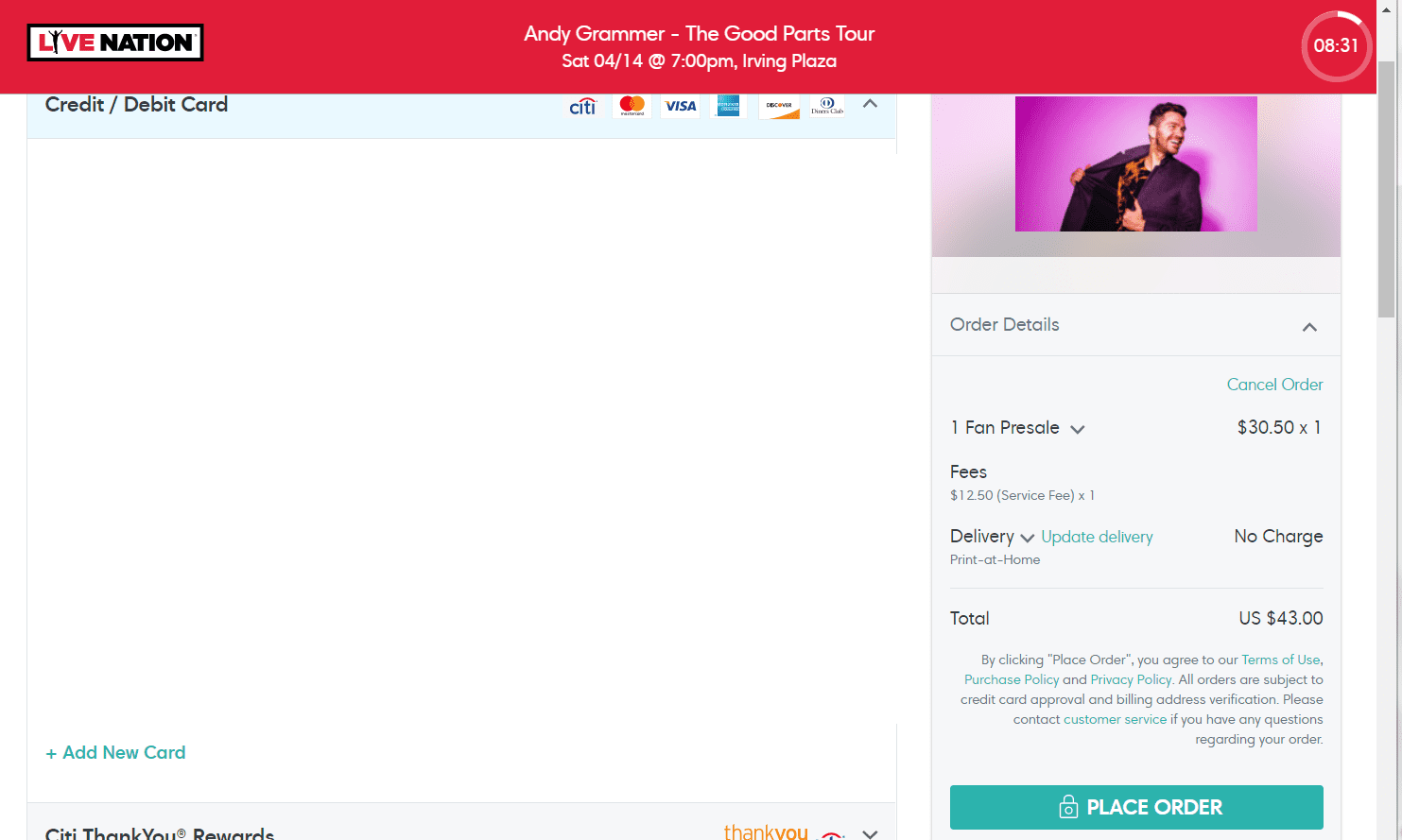 So, unless you take a positive action and actually ASK to see the fees, you never get a disclosure of the fees on Ticketmaster’s site.  Yet, they want resellers to disclose their fees up front.  The fees are displayed at some point of every reseller website… yet on the primary, they aren’t displayed at all.  Unless you specifically ask.

It is no secret that Ticketmaster’s recent increased earnings are due to their resale business. It has been covered that their primary competitor in the field, StubHub, has not seen the growth they wanted.  Yet Ticketmaster’s revenue is up 16% YOY (source: LYV 10Q statement), partly attributed to resale on their “integrated platform”.

But, this resale open marketplace can only take place on their integrated platform when they have the contract for the primary sales.  Please look at a show for a venue that sells its primary seats via TicketFly: 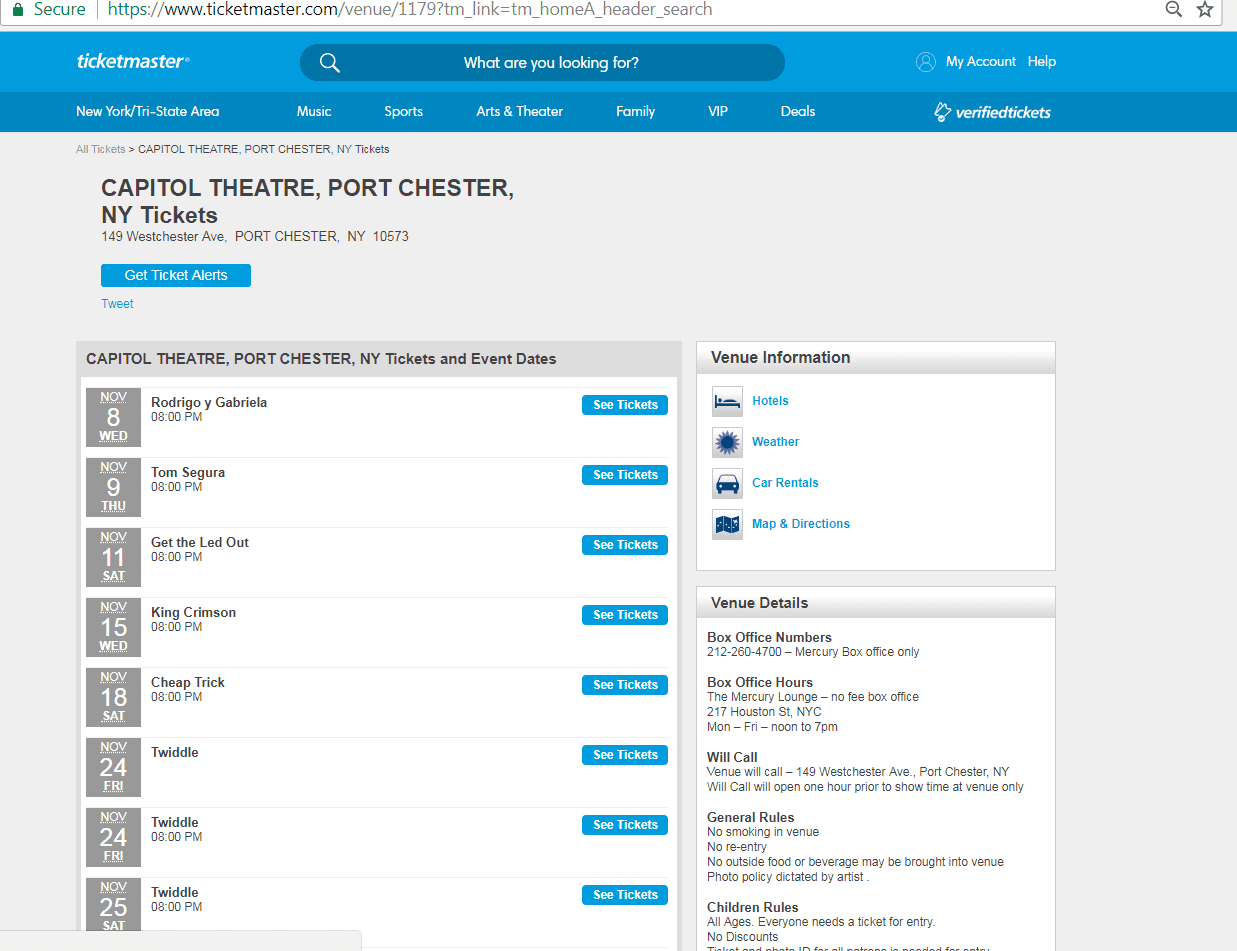 It looks just like any other Ticketmaster page where they are the primary seller.  And when you select ticket from there:

Sure… the words “Resale ticket” ARE on there.  But it is a much smaller font than the ticket listing or the price.  This site is designed to be opaque.

Opacity is Ticketmaster’s M.O. The topic of requiring disclosure of holdbacks came up.  A disclosure requirement that would require the venue to say how many tickets are available in each price category for each sale and how many are not available for sale was discussed.  Every venue and Ticketmaster were dead set against this, stating that it would only serve resellers by knowing how many tickets that were sold initially so they could “short” against it and know they would be coming out later.

The reality is a disclosure statement serves two purposes. First, it is there for fans to get information and make an informed decision to try and buy.  But it serves as in incentive for promoters/venues/artists to actually sell their product at the onsale.  One of the reasons secondary market prices are so high is because of lack of product.  If the product were to flow into the marketplace, you would find that fans would get more tickets; Yes… brokers would get more tickets too, but because there is more competition, the prices on the secondary side would be lower.

Markets can be manipulated by those that control the product. If no one knows how many tickets were actually sold or to whom, there is every incentive for acts and artists to “backdoor” their product onto the secondary market – a secondary market that can be manipulated via artificial shortages by the person who has the ability to “backdoor” them.  Is it any wonder Ticketmaster is so against disclosure requirements… unless, of course, it’s for their competition.

Now Ticketmaster wants to remove anti-transferability protection.  Currently under NY law an original issuer of a ticket must offer that ticket in a means that can be transferred outside the venue or its agent. They have invested heavily in their Presence ticketing system. They would like nothing more than to require every person that enters a venue gives up their personal information so they can be marketed to… Not to mention (of course) being the sole point of transfer.  Given Ticketmaster’s history of high fees and anti-competitive behavior, do YOU think this is in the fans best interest?  Or in the best interest or Ticketmaster?

In case you didn’t get the reference atop the post, this article was anonymously contributed by an industry insider. In an attempt to avoid retribution to their business by the company which holds the keys to practically every event of note in the United States, they opted to use a pen name used by Benjamin Franklin, who had several letters published under that name in the New England Courant.