Rockers Huey Lewis and the News have a slew of concert dates coming up, but due to medical issues, they were forced to cancel their St. Augustine show in Florida this April.

The band was set to play the St. Augustine Amphitheatre on April 22 with support from Richard Marx. According to Florida’s First Coast News, Lewis released the following statement on Tuesday:

“I’m so sorry to have canceled shows in one of my favorite places. I’m going through some medical problems at the moment which forbid me from performing, but I’m confident that I will be okay and back on the road soon. Thank you for understanding, and I promise to make it up to you soon.”

Tickets purchased through Ticketmaster will be refunded immediately. Although the band had not made a statement, their show in Hollywood, Florida on April 20 at The Hard Rock Event Center is cancelled as well, according to LiveNation and Ticketmaster’s sites.

This isn’t the first time Lewis has cancelled a show; the 67-year-old couldn’t make it to their scheduled show at Seaworld Seven Seas Food Festival this past February.

“To our fans in Orlando,” Lewis said in a Facebook post. “We are so sorry we have had to cancel our appearance at SeaWorld this coming weekend. We were looking forward to seeing you there, but Huey is unwell, and under doctor’s orders he cannot perform. We are sorry to disappoint our fans, and will try to reschedule as soon as possible.”

Huey Lewis and the News are best-known for the ’80s hit tune, “The Power of Love.” However, they’re still keeping up the rock star lifestyle, with multiple upcoming shows. If Lewis’s health improves, the band is set to play next in Tulsa, Oklahoma at the River Spirit Casino Resort in May. Check out the full list of upcoming gigs below. 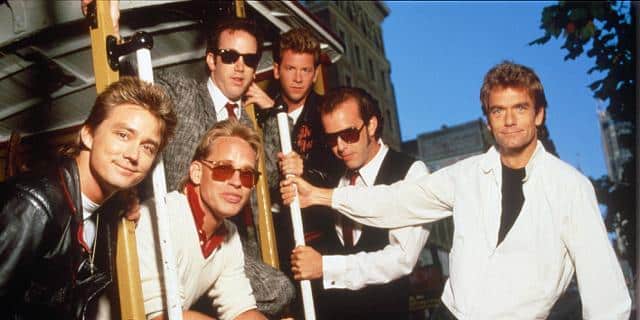 Huey Lewis and the News – 1984. Photo by Sipa Press/Rex Features